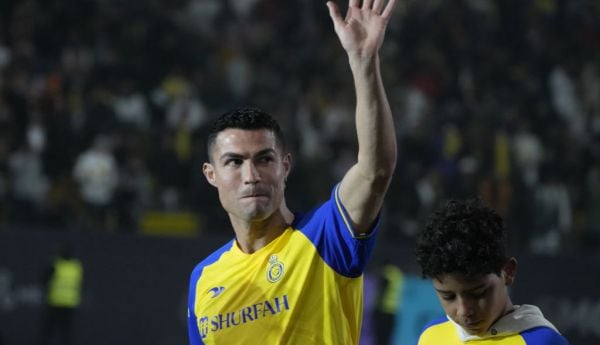 Cristiano Ronaldo has been urged to speak about human rights issues in Saudi Arabia after his big-money move to the country.

The Portugal superstar (37) has signed for Al Nassr until 2025, announcing at his unveiling that his “work is done” in Europe.

Amnesty International says Ronaldo’s signing is part of a “wider pattern of sportswashing” in Saudi Arabia, a country which has backed a breakaway golf league, hosted high-profile boxing bouts and Formula One grands prix.

Sneak peak from @cristiano to his new home 🤩 pic.twitter.com/tTkVUdQf0G

It is also interested in co-hosting the men’s football World Cup in 2030.

“Instead of offering uncritical praise of Saudi Arabia, Ronaldo should use his considerable public platform to draw attention to human rights issues in the country,” Dana Ahmed, Amnesty’s Middle East researcher, said.

“Saudi Arabia regularly executes people for crimes including murder, rape and drug smuggling. On a single day last year, 81 people were put to death, many of whom were tried in grossly unfair trials.

“The authorities are also continuing their crackdown on freedom of expression and association, with heavy prison sentences handed down to human rights defenders, women’s rights activists and other political activists.

“Cristiano Ronaldo should not allow his fame and celebrity status to become a tool of Saudi’s sportswashing. He should use his time at Al Nassr to speak out about the myriad of human rights issues in the country.”

Ronaldo’s salary at Al Nassr has been reported by a number of outlets as being upwards of €200 million a year.

“This contract is unique but I’m a unique player, so for me it’s normal,” he said on Tuesday.

“I gave my word to this club to develop not only the football but other parts of this amazing country.”