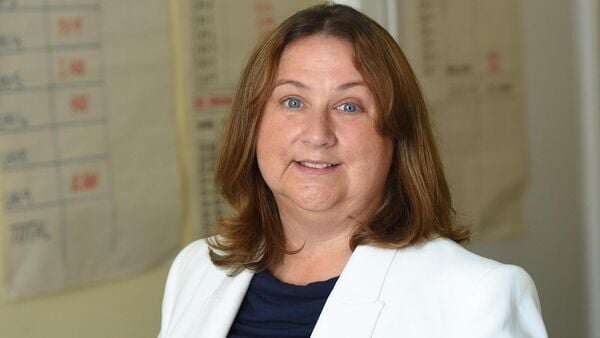 Minister of State Anne Rabbitte has expressed her disappointment that the person who threw a bag of cow manure at her torso during a public meeting in Gort on Wednesday night was not asked to leave the meeting and remained within feet of her for the remainder of the meeting.

Speaking on the Keith Finnegan Show on Galway Bay Fm, Ms Rabbitte said she did not want what happened to overtake the purpose of the meeting which was to discuss plans for a biogas plant in Gort.

While it was not unusual for local representatives to be “in the firing line” it was very disappointing “to have a bag of manure flung at your torso”, she said. The person involved had essentially assaulted two Government representatives who were there to represent their community, she said.

Attended a meeting tonight and a bag of sh.t thrown a me and my government colleague !!!

Ms Rabbitte said she had not addressed the meeting after the incident. “I actually wasn’t in a position to be able to speak, to be quite honest with you. The legs were taken right out from under me as far as I was concerned.

“I actually had dry mouth. I wasn’t able to put words together at that point. I was able to tweet, because I felt I needed to ventilate my anger of what was actually unfolding personally to me – and how I felt. I just didn’t feel good about it.”

When asked if she feared for her own personal safety, she replied: “I certainly did when I was leaving the room that night”. It was obvious that the person who threw the bag of manure had been “incredibly angry” she said.

“At the end of the day, whatever way you look at it, a person at a meeting last night assaulted two public Government representatives, representing their constituents who were there in good faith.”

“The person wasn’t removed from the room, the person continued in the room for the rest of the evening. I just felt very let down, and I think we hit a new low that it was ‘carry on regardless’ without keeping it respectful,” she added.

I’m amazed at how low it’s getting.

Ms Rabbitte said that politics had sunk to a new low, and this was likely to discourage young people and women in particular from going into politics.

“I’m amazed at how low it’s getting. I go out to do a day’s work, yes, I get well paid for it. I am going to represent my constituents the best I can. That’s what I was doing last night when a bag of excrement was flung at me.”

Fine Gael TD Ciarán Cannon, who also had a bag of manure thrown at him at the meeting, told Galway Bay FM and RTÉ radio’s News at One that the aspect that was of most concern to him was that the individual fully intended to do what he did. It was premeditated. It was disturbing that the person had gone out and filled two bags with manure and also that he had stayed in the room at the meeting close to Ms Rabbitte. “I wouldn’t have felt safe”.

Incidents like this highlighted the “creeping antagonism” against politicians and people “who put their head above the parapet”.

In his 20 years in politics the incident was unprecedented. While the level of personal endangerment had not been serious it was concerning that it was premeditated.

Social media had become a digital public square, where there was an alarming level of toxicity against politicians and that appeared to have spread out from there, he added.

Society should call out such behaviour and let it be known that it was not acceptable. “We need to get to that stage.”