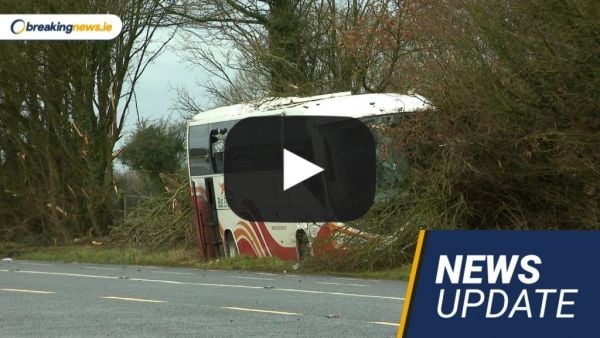 The driver of a bus has died after it crashed with around 20 passengers on board in Co Westmeath.

The collision happened in the townland of Killogeenaghan, Moate, at around 5.30pm on Wednesday.

No other vehicle was involved in the incident.

The driver, aged 55, sustained fatal injuries when the bus left the road and hit a ditch.

He was taken to Midland Regional Hospital Tullamore where he later died.

A post-mortem examination is due to take place.

Gardaí said some of the approximately 20 passengers on board required hospital treatment for non life-threatening injuries.

The road remained closed on Wednesday night with local diversions in place.

Garda forensic collision investigators will conduct an examination of the scene on Thursday morning.

Gardaí have appealed for witnesses or any road users with dashcam footage to come forward.

Minister of State Anne Rabbitte has expressed her disappointment that the person who threw a bag of cow manure at her torso during a public meeting in Gort on Wednesday night was not asked to leave the meeting and remained within feet of her for the remainder of the meeting.

Speaking on the Keith Finnegan Show on Galway Bay Fm, Ms Rabbitte said she did not want what happened to overtake the purpose of the meeting which was to discuss plans for a biogas plant in Gort.

While it was not unusual for local representatives to be “in the firing line” it was very disappointing “to have a bag of manure flung at your torso”, she said. The person involved had essentially assaulted two Government representatives who were there to represent their community, she said.

A representative for the Irish Hospital Consultants Association (IHCA) has said that his members have always been prepared to step up when called upon, but they did not want to be “flogged” for doing so when they were already carrying out that work.

Professor Alan Irvine was responding to a call from the Minister for Health Stephen Donnelly on Wednesday for consultants work at weekends and in the evenings.

Prof Irvine said that consultants were already working weekends and bank holidays, but that the issue was the shortage of a “whole package of supports”.

There were between 600 and 700 patients in hospitals who were “medically discharged” but there was no place for them to go safely, he said.

The issue remained one of capacity. “We are a wealthy European country, this shouldn’t be happening.”

Patients are dying unnecessarily in Irish hospitals because of overcrowding, according to a senior HSE doctor.

Emergency department overcrowding hit record highs this week, with 931 people waiting on hospital trolleys on Tuesday, falling to 838 people on Wednesday and 639 on Thursday.

Dr Mick Molloy, an emergency medicine consultant at Wexford General Hospital, said there is no quick solution to the problem.

“This is a massive building programme required across the whole State,” he told Newstalk radio on Thursday.

“The bed capacity of the hospitals is dramatically below international levels – it is dangerous and people are dying unnecessarily as a result.”

Russian president Vladimir Putin has ordered Moscow’s armed forces to observe a 36-hour ceasefire in Ukraine this weekend for the Russian Orthodox Christmas holiday, the first such sweeping truce move in the nearly 11-month-old war.

Mr Putin did not appear to make his ceasefire order conditional on a Ukrainian agreement to follow suit, and it was not clear whether hostilities would actually halt on the 1,100-kilometre front line.

Ukrainian officials have previously dismissed Russian peace moves as playing for time to regroup their forces and prepare for additional attacks.

At various points during the war that started on February 24th, Mr Putin has ordered limited and local truces to allow evacuations of civilians or other humanitarian purposes.