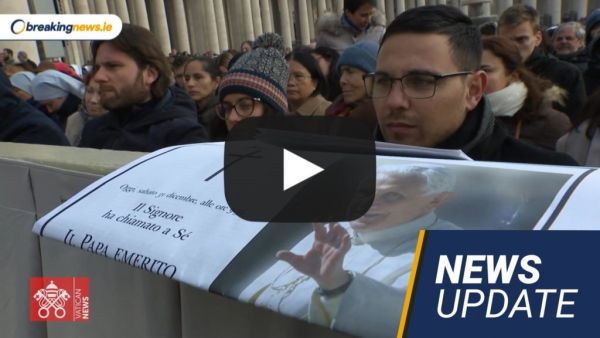 Pope Francis has honoured his predecessor Benedict XVI, presiding over a rare requiem Mass for a dead pontiff by a living one in front of thousands of mourners in St Peter’s Square.

Bells tolled and the faithful applauded on Thursday morning as pallbearers carried Benedict’s cypress coffin out of the fog-shrouded basilica and rested it before an altar.

Benedict’s longtime secretary, Archbishop Georg Gaenswein, bent down and kissed a book of the Gospels left open on the coffin.

Francis, wearing the crimson vestments typical of papal funerals, then took his place and opened the Mass with a prayer.

He closed the service an hour later by solemnly blessing the simple casket — decorated only with the former pope’s coat of arms.

Benedict’s body was then entombed in the basilica grotto.

The driver of a bus has died after it crashed with around 20 passengers on board in Co Westmeath.

The collision happened in the townland of Killogeenaghan, Moate, at around 5.30pm on Wednesday.

No other vehicle was involved in the incident.

The driver, aged 55, sustained fatal injuries when the bus left the road and hit a ditch.

He was taken to Midland Regional Hospital Tullamore where he later died.

A post-mortem examination is due to take place.

Gardaí said some of the approximately 20 passengers on board required hospital treatment for non life-threatening injuries.

The road remained closed on Wednesday night with local diversions in place.

Garda forensic collision investigators will conduct an examination of the scene on Thursday morning.

Gardaí have appealed for witnesses or any road users with dashcam footage to come forward.

Minister of State Anne Rabbitte has reported to gardaí that she had a “bag of sh*t” thrown at her while attending a meeting on Wednesday night.

Ms Rabbitte and Fine Gael TD Ciarán Cannon were subjected to the attack. Ms Rabbitte is understood to be taken aback and shocked by what happened.

On Twitter, she posted a message which said: “Attended a meeting tonight and a bag of sh.t thrown a (sic) me and my government colleague.”

Mr Cannon also took to social media following the incident, saying that an “idiot” got excrement to put into two bags throwing one at himself and the other at Ms Rabbitte. He said it was unknown whether the faeces was human or animal.

Owen Hanley, a Social Democrats representative on Galway City Council, has resigned following allegations made against him on social media.

The party, in a statement, said it believes it was appropriate that Mr Hanley resign and said the authorities have been made aware of what has been alleged.

In a statement on Facebook on Tuesday, Mr Hanley said: “In the past 48 hours certain allegations have been made about me. These are very serious matters and will obviously take a considerable length of time to be investigated fully by the appropriate authorities.

“In these circumstances I believe that the correct thing for me to do is to resign my membership of Galway City Council. I don’t propose to make any further comment in relation to the matter.”

The party responded on Wednesday, saying it believed it was appropriate that the allegations against Mr Hanley were thoroughly investigated.

A lucky Lotto player has won €11 million in the midweek draw.

The ticket was sold in Co Limerick.

The winner has 90 days to claim the prize.