RAISING the standards to a consistently high level is the key for the Carlow senior hurlers heading into 2023 according to manager Tom Mullally.

In the McDonagh Cup last year, Carlow ranged from losing by 15 points at home to Kerry to finishing the competition with their best performance of the year when beating Offaly by five points in Tullamore.

This year, Mullally wants to see his team produce that level of performance on a more regular basis.

“That’s the challenge for us,” he said.

“That’s something we have to work on but 2023 is going to be more difficult season. There are a lot of teams who are very close to each other, form and injuries and that kind of thing will benefit some teams but not others. Both the league and the Joe McDonagh Cup should be ferociously competitive. Last year we probably expected more than we actually delivered and there’s learnings there, we have to raise our standards before we can talk about winning anything,” said Mullally.

“We’re well aware of the challenges ahead of us this year and a good year for us would be to get our standards right and then we’ll see where that can bring us. We want to be competitive, it would be easy to say we want to win the league and the McDonagh Cup and of course we’d love to do that, but we definitely won’t be competitive in either if we don’t get our standards right and that’s hugely important to us,” added the Carlow boss.

There have been additions to the squad ahead of the new season, such as James Doyle from St Mullins, but the panel is unlikely to be at full strength for a few weeks yet with the likes of Chris Nolan given the opportunity to concentrate on the Fitzgibbon Cup. 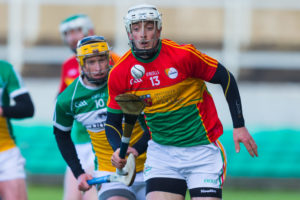 James Doyle is back in the Carlow team for tonight’s Kehoe Cup tie against Kildare
Photo: ©INPHO/Tom O’Hanlon

“We’ve a few new lads in and we also have a few lads who will be a little late joining up with us. We have some players involved in the college competitions and we’ll let them concentrate on that for now,” said Mullally.

Marty Kavanagh is another not in with the panel at the moment and Mullally has been happy to let him recharge his batteries.

“He’s taking a rest at the moment, he’s had a few injuries and then had a good run with the club. It’s important that he does get a break so that he’s right and he’s fit if he does come back in. Obviously we’ll be talking to him to see where he’s at and it’s from this week that those sort of conversations will be happening,” he said.

Conor Kehoe, Fiachra Fitzpatrick (DCU) and Jack McCullagh (TUS Midwest) are also involved in the Fitzgibbon Cup and Mullally wants to see them further develop over the coming season.

“You’d hope that they will continue to develop but none of that is guaranteed, it’s down to application, ambition, appetite and you need no small amount of sacrifice too. Those players mentioned got their chance in 2022, in 2023 they can either add value to that or leave it go. That chapter is still to be written for lads like that so we’ll see where that goes over the coming months,” said Mullally, who is pleased with the commitment shown so far.

“Last year when we rang around at the start of the year there was maybe 15 or 16 players who were unable to commit to the county squad. This year, there is appetite there to join up with the squad and that is good to see,” he said.

The Kehoe Cup starts with a visit to Kildare’s training centre in Hawkfield tonight and having managed Naas to back to back county titles in that county, he does have a good knowledge of the team who Carlow will face in their first game not only in the Kehoe Cup but also in the league and McDonagh Cup too.

“I’d know some of them obviously but others not so well and inter-county is a completely different mix than club. Kildare have been back training before Carlow and they will be looking for a good start this year, they have been learning over the last few years under David Herity, they had a setback when they were relegated from the McDonagh Cup but they bounced back well in the Christy Ring last year and they will be difficult opponents for us.”