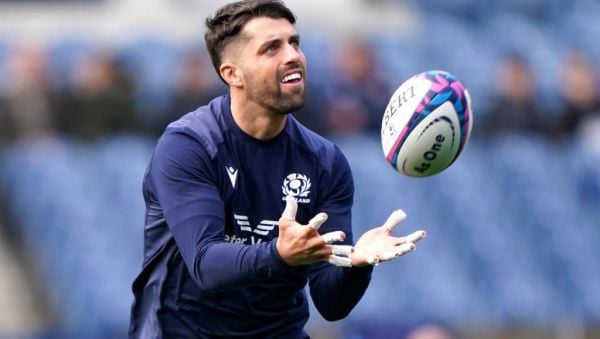 Adam Hastings looks set to miss the Six Nations as Scotland continue to be plagued by injury problems in the lead-up to the tournament.

The fly-half damaged his shoulder while playing for Gloucester in their Gallagher Premiership defeat away to Leicester on Christmas Eve.

A statement on the club’s website on Thursday revealed that Hastings will require surgery, while head coach George Skivington said earlier this week “he will not be back any time soon”.

The match against Leicester was the 26-year-old’s first outing since he suffered an injury while playing for Scotland against Fiji on November 5, paving the way for the much-hyped recall of Finn Russell who had been controversially omitted from Gregor Townsend’s initial autumn series squad.

Hastings’ absence for the Six Nations leaves Scotland thin on the ground for options at stand-off, with Blair Kinghorn now the only back-up option to Russell who has notable international experience at number 10.

Glasgow’s Ross Thompson, who has featured in recent squads, is battling his way back from ankle surgery, so Munster fly-half Ben Healy, who is Scottish qualified and due to join Edinburgh next season, has been touted in some quarters as a potential candidate to be called up.

Hastings’ lay-off is a further blow to Townsend as he prepares to name his Six Nations squad this month, with key trio Zander Fagerson, Darcy Graham and Hamish Watson – all of whom would be expected to start if fully fit – currently working their way back from injuries and deemed doubtful for the start of the tournament, which gets under way with a Calcutta Cup showdown against England in four weeks.

Edinburgh wing Graham sustained medial ligament damage at the start of December and is set to be out until February, while his club-mate Watson has been sidelined since suffering a head injury in Scotland’s defeat by New Zealand in mid-November.

Glasgow revealed last month that Fagerson would be “out for the foreseeable” with a hamstring injury, while the prop’s Warriors team-mates Scott Cummings and Rory Darge are also in a race to be fit for the Six Nations as they battle to recover from the injuries that ruled them out of the autumn Tests.

However, Warriors assistant head coach Nigel Carolan provided an encouraging update on the progress of the trio this week when – referring to Fagerson, Cummings and Darge – he said that “it might be too late for us (Glasgow) this block of games, but hopefully Scotland will benefit from their return.”