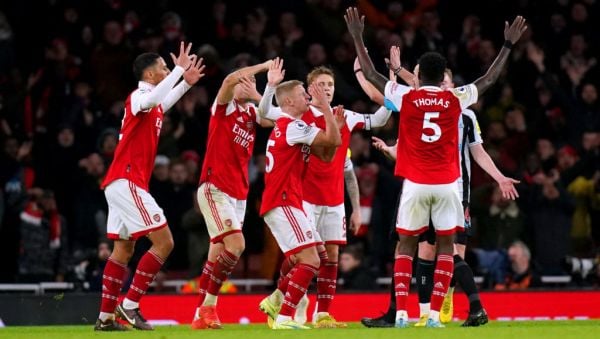 Arsenal have been charged with failing to ensure their players conducted themselves in an orderly fashion during their goalless Premier League draw with Newcastle on Tuesday.

The Football Association has said the Gunners will have until Tuesday to respond.

The charge relates to an incident in the fifth minute of stoppage time when a number of Arsenal players surrounded referee Andrew Madley to claim a penalty for a possible handball.

Madley, who issued nine yellow cards in what became a fractious and scrappy encounter at the Emirates Stadium, dismissed their appeals.

An FA statement read: “Arsenal FC have been charged with a breach of FA rule E20.1 following their Premier League match against Newcastle United FC on Tuesday, January 3 2023.

“It is alleged that Arsenal FC failed to ensure their players conducted themselves in an orderly fashion in the 95th minute, and the club have until Tuesday, January 10 2023 to respond.”