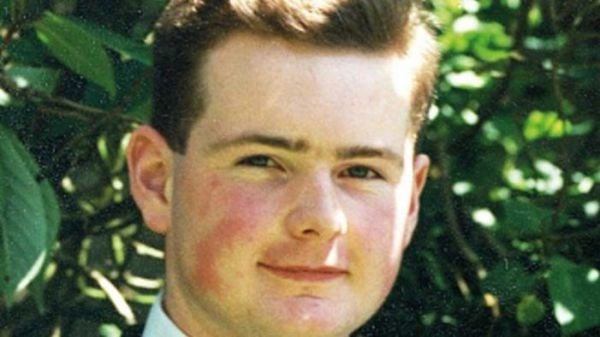 The brother of an RUC constable shot dead by an IRA gunman in Derry city 30 years ago this month has said he will never stop fighting for justice.

Joe Ferguson (59), the older brother of Michael Ferguson, also hit out at proposed new British government legislation to deal with the legacy of the Troubles, saying nothing should stand in the way of the rule of law.

Michael, from Omagh, Co Tyrone, was 21 when he was shot twice at close range in the back of the head in Shipquay Street on January 23th, 1993, while on duty.

Joe Ferguson, who was also a police officer, recalled how he found out about his brother’s death.

He said: “I was on duty that day in Co Fermanagh. I was the station duty officer. We had an old telex machine. When there was an important message came through it gave out this loud noise.

“I went over and looked and it was a small write-up about a police officer with gunshot wounds in Londonderry.

“There was something, call it a gut feeling, but I just knew it wasn’t good.”

Mr Ferguson rang the control room at Omagh police station where he was told his brother had been murdered.

“My colleagues told me all they heard was a scream coming from me and the phone dropped. It was a terrible way to find out.

“She was sitting waiting for him in a car park for an hour. She thought she had been stood up. She has stayed in touch with us over the years.

“Michael was just starting out in his career, planning his whole life.”

Only one person has been jailed over the killing for a charge of assisting murder, but the gunman has never been found.

Mr Ferguson said: “We were a very close family. We had already lost our father so I, as the eldest, sort of took over that role. My mother Kathleen lived in Omagh, my sister Susan was married with young kids.

“The impact of Michael’s death on all of us was traumatic, it was horrendous.

“He was my mother’s baby. You just never get over it.

“The years go by but things are never the same. At Christmas there is still a seat missing, and you are always full of what ifs.

“My mother was never the same after Michael died. She was a very joyous, happy woman who loved to cook.

“She never got over Michael’s death, she failed badly after his death, her health started to go downhill. I think she lost the will to live.

“I have to keep hoping for justice, I will never stop fighting for it. Michael was murdered by a criminal.

“I still have that hope that someone will come forward with information.

“With the advancements in DNA technology, who is to say that there might not be something that can be found? I am asking all of Michael’s uniform and bits and pieces to be rechecked for DNA.

“The gunman who shot Michael at the time was described as a young male. I have no doubt that he has grown up now, he may have his own family tragedies. Maybe he will have his conscience pricked.”

A UK government Bill, which introduces conditional amnesties for Troubles offences, is on course to become law this year despite opposition from political parties in the North and victims’ organisations.

Mr Ferguson said: “What the government are wanting to do is totally contrary to every legal system in the world. It’s beggars belief.

“Murder is murder. You take a life, I feel that there is nothing that should stand in the way of justice. It has to apply for everyone.

“The government cannot just draw a line under the past. Families who are affected cannot just move on.

“This wouldn’t happen in any other part of the world.”

SEFF director of services Kenny Donaldson said: “The Ferguson family rightly continue to press for justice and accountability and for the state to uphold its requirements not only to their family but to other families similarly impacted.”