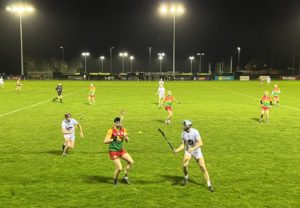 A much changed Carlow side were well beaten by Kildare in Hawkfield on Thursday evening in the first round of the Kehoe Cup.

The opening exchanges of the game were closely match and with James Doyle and Ciaran Whelan scoring a brace of points, Carlow led 0-5 to 0-3 after 20 minutes.

However, two defensive lapses presented possession to Kildare in dangerous areas and David Qualter and Mark Delaney, in the 22nd and 29th minutes respectively, punished Carlow to the full by firing past Brian Treacy.

There were plenty of signs of rust in both team’s shooting during the first half and both had hit a number of wides by the time the final whistle blew with Kildare leading 2-8 to 0-7.

The difference was that Kildare had their poor shooting half while playing into the wind and when they turned around, they markedly improved with the wind now at their back.

Things just got worse for Carlow in the second period in terms of scores. Richard Coady and James Doyle scored inside the opening six minutes after the restart but Carlow then went 28 minutes without a score before Whelan landed a free in the 69th minute.

In between those points, Kildare had scored 1-8 without reply, the goal coming from Cian Boran in the 46th minute, and they ran out comfortable winners.

These two teams will face off again in the first round of the Allianz National Hurling League Division 2A and the McDonagh Cup but the line ups for those games are likely to be much different and this was very much shadow boxing between the two counties before the more important games to come.

Carlow’s next game in the competition is a home game against Wicklow in Netwatch Cullen Park at 2pm on Sunday 8 January.