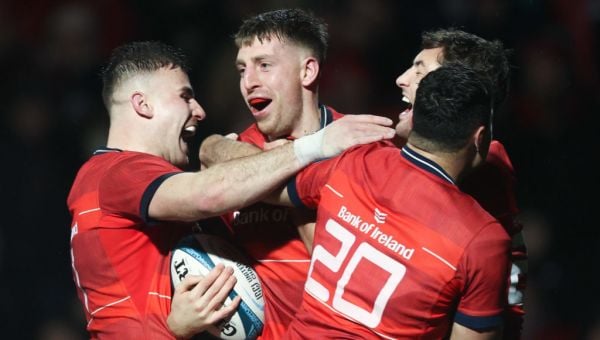 Liam Coombes crossed over for a brilliant 74th-minute bonus-point try as Munster recorded a comprehensive 33-3 United Rugby Championship victory over the Emirates Lions at a wet Musgrave Park.

Jordan Hendrikse’s early penalty was the Lions’ only score, as all five BKT URC points went to the hosts thanks to second-half tries from Paddy Patterson, Coombes and Buckley.

The Lions came to Cork having won their last four fixtures outside of South Africa and Hendrikse’s right boot opened the scoring in the fifth minute.

Munster had an early reshuffle with hooker Diarmuid Barron going off injured, but his replacement Buckley crossed from a well-controlled ninth-minute lineout drive.

Leading 5-3, Munster survived an intense bout of scrum pressure – with Buckley twice popping up five metres out – as the Lions failed to force a likely try.

A powerful burst by URC player-of-the-match John Hodnett helped Munster to break down the physical Lions defence, with O’Donoghue able to squeeze over from a 28th-minute ruck.

As the Lions tried to hit back, Darrien Landsberg lost a crucial lineout forward and then Jean Kleyn stole one just before the interval.

Munster emerged empty-handed from a strong spell on the restart, Alex Kendellen held up over the line and O’Donoghue denied by big prop Asenathi Ntlabakanye for the concession of a turnover penalty.

Sharp handling wore down the Lions defence soon after, scrum-half Patterson grasping his chance to snipe clean through from a ruck and score under the posts, while Healy converted for a 19-3 lead.

On for the injured Hendrikse, Gianni Lombard missed touch from a penalty and an Edwill Van Der Merwe break also petered out, with Kendellen replying with a turnover penalty.

While the Lions scrum continued to earn penalties, their lineout was unreliable with Gavin Coombes claiming another steal.

Despite a crooked throw from Buckley, Liam Coombes bagged the bonus point with a smashing solo effort before Buckley powered over from a late maul, with Healy finishing with four conversions.