New record high of 11,542 people recorded as homeless in Ireland 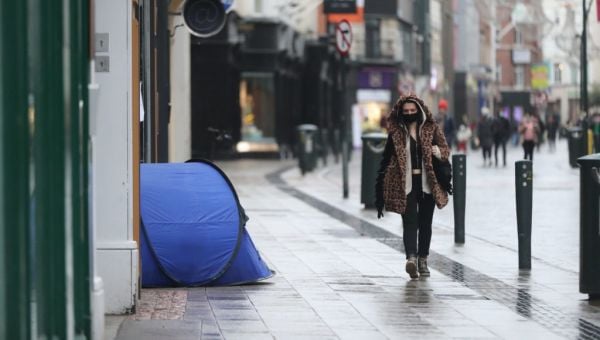 There are 11,542 people recorded as homeless in Ireland, the Government’s latest figures show, a new record high.

It is the fifth consecutive month that official homeless figures reached a record high, despite a temporary eviction ban since November.

The Department of Housing figures for November show there were 8,048 adults and 3,494 children recorded as homeless – an increase of 14 children on October’s figures.

Housing charity Simon Community said it represents an increase of 1.27 per cent in one month and a 26.85 per cent increase on the same period last year, when 9,099 people were recorded as homeless.

It also said the figure of 1,371 homeless 18 to 24-year-olds represents a 4 per cent monthly increase, marking another record high.

Wayne Stanley, executive director of the Simon Communities of Ireland, said the eviction ban was an “important step” but if further action is not taken, “unthinkable” homeless figures will be “surpassed and redefined each month”.

“The actions taken while the current moratorium is in place will go a long way to defining what can be achieved in homelessness in the coming year.

“Now we need to see momentum on the provision of secure affordable accommodation to those in homelessness in the coming weeks and throughout 2023.

“It is timely to reflect that 11,542 people living in emergency accommodation only a year ago seemed unthinkable.”

“Otherwise, we are facing into ongoing extensions and renewals of the eviction ban and that’s not a long-term solution.

“In the short-term, this means doing more with what we have, and looking to the allocation of current local authority housing and vacancy in the general housing stock.

“We need to see more innovation in housing provision in 2023.

“We welcome the focus on rapid-build homes and will be calling on Government to ensure that innovation in this area is driven forward.

“We would also highlight again the need for the insertion of a right to housing in our constitution.”