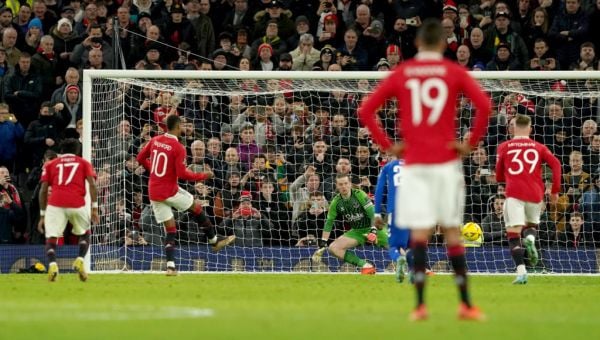 England forward Marcus Rashford was on target again as Manchester United earned a nervy 3-1 victory over Everton in the FA Cup third round on Friday.

United named a strong starting XI and raced into an early lead after Brazilian forward Antony slid the ball home at the far post four minutes in.

Winless in their last seven games in all competitions prior to their trip to Old Trafford, Everton fans would have been fearing the worst, but 10 minutes later, Connor Coady capitalised on an error from United goalkeeper David de Gea to level.

United had several chances to retake the lead before Coady found the net at the wrong end of the pitch, turning Rashford’s cross past Everton goalkeeper Jordan Pickford shortly after halftime to put the hosts 2-1 in front.

Substitute Dominic Calvert-Lewin thought he had earned Everton a dramatic late draw and a replay with a near-post equaliser, only for VAR to rule the goal out for offside.

To compound Everton’s woes, Rashford fired home a stoppage time penalty to score for the fifth successive match and put the seal on a seventh win in a row in all competitions for United.