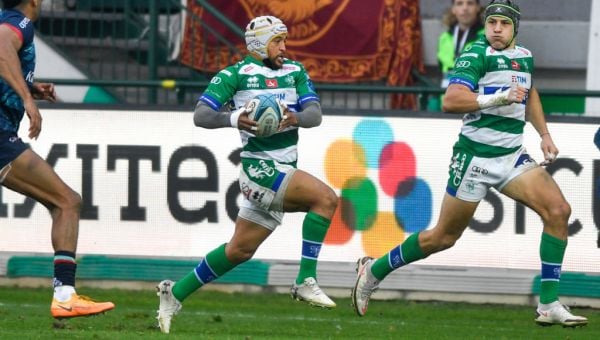 A late penalty from Rhyno Smith saw Benetton move into the top five of the United Rugby Championship following a 31-29 victory over Ulster at the Stadio Monigo.

After back-to-back wins against Zebre Parma over the festive period, the Italians secured their fourth triumph in a row to climb above Munster.

Ulster enjoyed the bulk of the play during the opening stages and they were rewarded with O’Sullivan’s second try for the province.

A penalty into touch gave Ulster a lineout 15 metres out and quick ball through the backs saw number eight Nick Timoney break through three tackles before he was stopped.

The ball was recycled back inside and O’Sullivan strolled through a gap in the Benetton backline.

Benetton responded and were level within four minutes off the back of a big forward drive.

Their pack pushed Ulster back to within five metres of the line and the ball was quickly shifted to fly-half Albornoz to dance over the line and convert himself to make it 7-7.

Just short of the midway point of the first half they were ahead with a superb try.

Benetton take the win at Stadio Monigo after a dramatic finish here in Italy.

Just short of the midway point of the first half they were ahead with a superb try.

Albornoz was again at the heart of it as he broke through a series of tackles before a superbly-weighted kick from centre Brex was plucked out of the air on the left touchline by Ratave to run in under the posts.

Albornoz put a straightforward penalty over shortly before the break after James Hume was penalised for offside and John Cooney’s penalty on the stroke of half-time made it 17-10 to the Italians at the interval.

The Benetton fly-half restored the 10-point advantage with a drop-goal two minutes after the restart.

Ulster made it a five-point game after 55 minutes through hooker Herring’s third try of the season.

The Irish side were knocking on the door from the set piece and from a maul close to the line, Herring went low around the side to touch down.

Benetton, though, immediately moved beyond a converted score ahead with a monstrous penalty from just inside the Ulster half from Smith.

Another fine move saw the Italians further stretch their advantage.

Following a turnover by Sam Hidalgo-Clyne, the ball quickly moved through hands for Smith to play the final ball out to Brex on the left wing to crash over in the corner.

Ulster hit straight back after being camped on the Benetton line and took advantage of their territory with full-back Lowry burrowing over and Cooney converting.

With just five minutes left on the clock, Ulster edged themselves ahead when another penalty to the corner produced a clean lineout win before Giovanni Pettinelli was yellow-carded for pulling down the driving maul and referee Ben Whitehouse went under the posts for a penalty try.

But Ulster’s discipline again let them down to give Smith a shot at goal with two minutes remaining and he converted via the post to secure a thrilling victory.