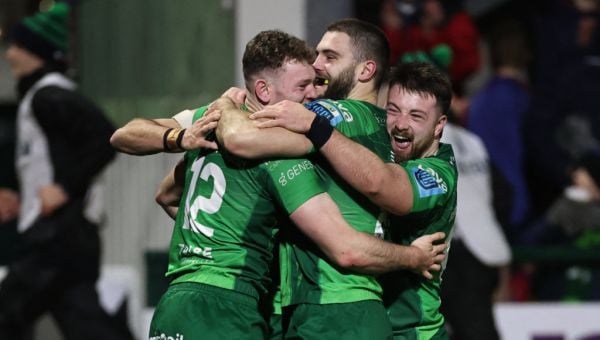 Three first-half tries laid the foundations for Connacht’s much-needed 24-12 BKT United Rugby Championship win over the Sharks at the Sportsground.

Young centre Cathal Forde crossed twice in a player-of-the-match performance, with Conor Oliver and Tiernan O’Halloran also claiming tries to give the hosts a 19-0 half-time lead.

Squad rotation saw the Sharks retain only three starters from their 47-20 victory over the Bulls, while their director of rugby Neil Powell stayed behind in Durban in order to prepare for the Heineken Champions Cup next week.

The strong wind made for an error-strewn start, obstruction by Josh Murphy at a lineout robbing Connacht of their first real opportunity but they made no mistake midway through the first half.

You can’t aFORDE to give this man a sniff tonight

A Kieran Marmion break led to a penalty and from the lineout, a surging maul saw flanker Oliver ground the ball in the left corner.

The post denied Jack Carty’s conversion but he was on target when adding the extras to Forde’s first of the evening, the 21-year-old being the beneficiary of Tom Farrell’s gobbling up of a Mack Hansen kick over the top.

Turnovers cost the Sharks in their attempts to respond, and full-back O’Halloran got on the scoresheet with a crisply-executed move just before the interval.

Turning into the wind, Connacht came through Shane Delahunt’s sin-binning unscathed. Indeed, only a Farrell knock-on ruled out what would have been a tremendous team try finished off by Carty.

The bonus point was secured when Forde blocked down a Nevaldo Fleurs kick to widen the gap to 24 points.

Centre Van Rensburg got the Sharks on the board on the hour mark, bursting through a gap for replacement Lionel Cronje to make it a seven-pointer.

Kerron van Vuuren, another of the South Africans’ bench players, had a quick-fire try ruled out for Grant Williams being offside from a charge-down.

Bleuler did burrow over for some late consolation, but it was too little, too late from the Joey Mongalo-coached side.