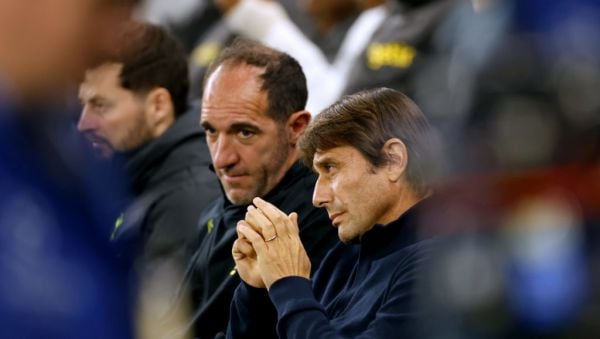 Cristian Stellini has downplayed concerns over Antonio Conte’s future by insisting they could stay for a “long time” at Tottenham.

A difficult winter has seen Spurs drop out of the Premier League top four and Sunday’s defeat at home to Aston Villa saw the team booed off following in-game chants calling for chairman Daniel Levy to go.

The Tottenham Hotspur Supporters’ Trust wrote to the board this week expressing their “genuine concern” over the direction of the club, citing the length of Conte’s current contract as a key issue and urging investment to be made during the January transfer window.

Full focus on the FA Cup 👊

Conte himself recently conceded he would only stay at the club if he was 100 per cent convinced by the project and, with his deal set to expire in the summer, speculation over his future continues to gather pace even though the club do hold an option to extend it by a further 12 months.

“Fifteen months is not a big period. We are in the way we expect after 15 months. For that reason, we are in confidence.

“We are in a good moment. We have to work. Like Antonio has said many times, we need passion and heart in the work. It’s not the time of the contract that decides.

“Your behaviour is the work you do to decide the result. We are confident to stay here a long time because we are working hard and the players follow us.”

A midweek 4-0 win at Crystal Palace was a timely boost, especially given a growing injury list that contains Rodrigo Bentancur, Dejan Kulusevski, Richarlison and Lucas Moura.

Spurs broke their duck of conceding the first goal in 10 consecutive matches on Wednesday night and will hope to build momentum against Portsmouth before Premier League leaders Arsenal visit on Sunday week.

Conte’s assistant Stellini stepped in to take on press conference duties on Friday after the Spurs boss was too upset to speak following the death of former Juventus team-mate Gianluca Vialli.

Stellini admitted the past few months had taken an emotional toll on the 53-year-old, with Tottenham’s fitness coach Gian Piero Ventrone dying in October, while the death of Conte’s old Serie A adversary Sinisa Mihajlovic occurred last month.

“It’s hard to talk about this,” Stellini added.

“Antonio is a tough man. Maybe this moment (he) is more closed to show his feelings. Only we have to stay close to him, stay together, this is a family behaviour.

“We are, we feel, like a family. After this type of loss you have to stay so close to show love.

“(But) he doesn’t drop the intensity. He can find new energy, because this is the type of man, this is Antonio.”