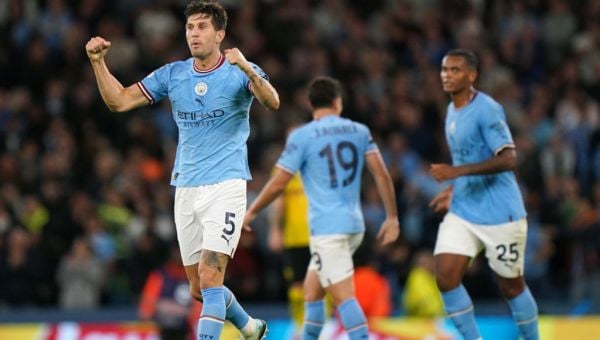 The champions responded to Arsenal’s draw against Newcastle earlier in the week by grinding out a hard-fought 1-0 win at Stamford Bridge to move back within five points of the Premier League leaders.

England defender Stones feels City are now moving back in the right direction after being held to a frustrating 1-1 draw by struggling Everton in their previous outing on New Year’s Eve.

The 28-year-old said: “We know how we play and we know what is expected of us. The manager wants us to play well and winning games comes with that as well.

“When we play well and we’re on form, we’re confident, we create a lot of chances and everything kind of comes off. We want to get back into that rhythm now.

“I think Thursday was a great start after the previous game. Games are coming thick and fast now so hopefully we can keep it going.”

City’s attention now switches to the FA Cup as they face Chelsea again on Sunday, this time at the Etihad Stadium.

Stones, who has been in outstanding form since returning from the World Cup, is likely to feature again with Ruben Dias still sidelined by a thigh injury and Aymeric Laporte again a doubt.

Laporte will be checked having not made the squad for the past two games due to a back problem.

Sunday’s encounter is followed by a Carabao Cup quarter-final at Southampton in midweek and then a derby against Manchester United. City also have two games against Tottenham in the coming weeks.

Stones feels it is important City focus on themselves and not look too far ahead.

He said: “I think with the players that we’ve got and how we play we can be our biggest enemy, so we’ve got to keep our feet on the ground and keep focusing on the match in hand and see where it takes us.”