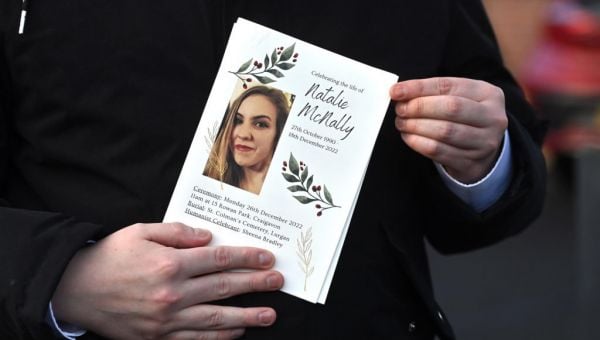 Detectives investigating the murder of Natalie McNally in the North have seized a car.

The vehicle was taken from an address in the Lisburn and Castlereagh area for further examination.

Officers also carried out house-to-house inquiries in the Lisburn area on Saturday.

Ms McNally (32), who was 15 weeks pregnant, was stabbed in her home in the Silverwood Green area of Lurgan, Co Armagh, on December 18th.

Police have made two arrests but no-one has been charged.

A 32-year-old man arrested on December 19th was released unconditionally and is no longer a suspect.

Detectives from our Major Investigation Team will tomorrow, Sunday 8 January, revisit the scene of the murder of Natalie McNally.

A second man detained on December 21st, also 32, has been released on police bail for further inquiries.

Earlier this week detectives said the main line of inquiry was that Ms McNally was killed by someone she knew and was comfortable allowing into her home.

Officers have said they do not think there is a risk to other women in the area.

On Friday officers searched a number of areas close to Silverwood Green. They also went to a business property in the Armagh and Craigavon area.

On Saturday, Detective Chief Inspector Neil McGuinness, leading the investigation, said officers will revisit the murder scene on Sunday in a bid to encourage anyone with information to come forward.

“Tomorrow, Sunday, January 8th, will mark three weeks since Natalie, who was 15 weeks pregnant, was brutally murdered in her own home,” he said.

“Tomorrow our officers will be revisiting the scene. We will be speaking with motorists and pedestrians in a determined attempt to jog memories.

“This is just one part of an extensive investigation, in which we’ve already carried out hundreds of house-to-house inquiries and seized over 3,000 hours of CCTV footage.

“The deaths of Natalie and her unborn baby have left unimaginable heartache to a loving family, whose world has been turned upside down.

“Amidst their pain, Natalie’s devoted family have, somehow, found the strength to appeal publicly for anyone with information to do the right thing and speak up.

“And, likewise, we remain absolutely steadfast in our determination to bring the killer to justice.”

Mr McGuinness repeated his appeal for help identifying a man seen arriving at and leaving the street where Ms McNally lived, on the night of the murder.

“We have released CCTV footage for all to see, and our efforts to identify the man in this footage remain ongoing,” he said.

“You’ll see the suspect arriving at Silverwood Green that night at 8.52pm, and you’ll see the same figure walking away at 9.30pm.  I want to keep this image firmly in your mind.

“Please remember, this was the night of Sunday, December 18th – that’s the same day as the World Cup final.

“I’m asking you to cast your mind back to that Sunday. If you witnessed anything untoward, no matter how insignificant it may seem, or if you have captured dashcam or CCTV footage, please get in touch.

“I’m also keen to highlight the reward of up to £20,000 from Crimestoppers, who are a charity and independent of the police.

“The reward is being offered for information given directly to Crimestoppers that leads to the arrest and conviction of those responsible for Natalie’s murder.

“Crimestoppers take information completely anonymously, meaning they will never ask for or store any of your personal details.”

Earlier, police said they believe they have recovered the weapon used in the murder.

A silent vigil for Ms McNally was held on Thursday at Parliament Buildings, Stormont, attended by her three brothers.

One of her brothers, Declan McNally, told those gathered at the vigil: “Whatever differences of opinions there are in this country, we know there is no difference of opinion and everybody wants to see an end to violence against women and girls.

“And everybody in society has to redouble our efforts to end violence against women and girls in memory of our sister Natalie.”