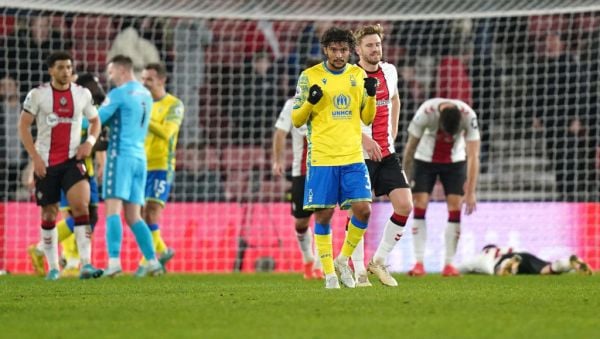 Steve Cooper has had to warn new Nottingham Forest signing Gustavo Scarpa to keep his tricks for the football field and not the half-pipe.

Scarpa signed for Forest on a free transfer before Christmas following the expiry of his contract at Brazilian club Palmeiras.

The 29-year-old, who made his debut from the bench in the 1-0 win at Southampton in midweek, is a keen skateboarder and often showcases his talent on social media.

Cooper accepts that creative players often need an outlet away from the game but does not want his talented playmaker, who is likely to start in Saturday’s FA Cup third-round clash with Blackpool, to put himself at risk.

“I learnt that a little bit with England, we had all these amazing young talents, sometimes these creative players are creative people.

“You have to embrace that. That’s the world we live in now – you have to give license to people to be who they are.

“As long as they stay within the guidelines, a little bit.

“That’s what I keep telling myself about these guys, you want them to be risk-takers and creative players. If they’re confident on the pitch they need to be the same way off the pitch, there is no problem for me.”

Scarpa, who can also solve a Rubik’s Cube in 37 seconds, needs time to adapt to the English game, but an FA Cup game in January at Bloomfield Road could be the perfect introduction.

“I think we have to be careful, he’s not started and in an ideal world, he would have played more during the break,” Cooper added.

“But we said he wasn’t quite right physically so we couldn’t do as much of that, plus we knew he couldn’t play until this week anyway.

“He’s had an individual programme that we’ve been working on that would’ve helped everything for him, physical and psychological.

“We will be pushing him and supporting him.

“The more we can expose these guys to English football for the first time, the better.

“Saturday is an opportunity for Gustavo, not only as a chance to play well and win the game, but also to get used to English football. If we can do that we will.”