Unbeaten Leinster come from behind to see off Ospreys 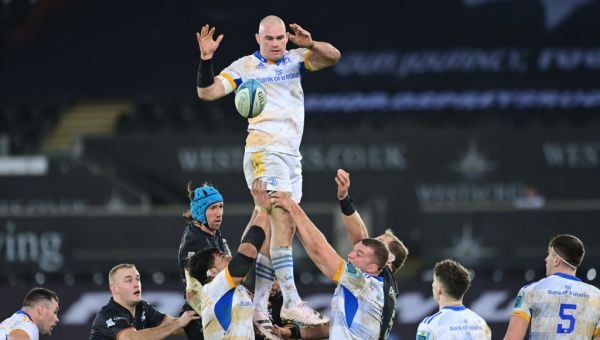 Ospreys pushed leaders Leinster all the way but two late tries saw the Dubliners maintain their unbeaten record in this compelling URC clash at the Swansea.com Stadium which ended 24-19.

The home side led for 63 minutes before late Leinster tries by full-back Hugo Keenan and wing Jimmy O’Brien ended hopes of a victory for the Welsh side.

Wing Keelan Giles had crossed for a first-half try and the boot of makeshift wing Cai Evans had put the Ospreys 16-10 ahead until Leinster finally struck in the last quarter to make it 12 wins on the trot in the URC.

Evans’ 73rd-minute penalty salvaged a bonus-point for the home side and they pushed the URC’s dominant force for most of the game with a resolute defensive display and an impressive scrum.

The home side were without the likes of Wales quartet of Rhys Webb, Alex Cuthbert, Jac Morgan and Adam Beard but had the experience of British and Irish Lions Alun Wyn Jones and Justin Tipuric to call on.

Tipuric, in particular, produced a captain’s performance and sent a timely reminder to returning Wales coach Warren Gatland of his ability as a player and a leader.

The Ospreys were forced into a late change with playmaker Owen Williams withdrawing due to sickness and he was replaced by Jack Walsh in the 10 shirt.

To add to those woes, wing Mat Protheroe was forced off with an arm injury early on to be replaced by Wales centre Joe Hawkins, but it was the Ospreys pack that forced the issue early on, demolishing the visitors’ scrum.

Wing Evans landed an early penalty before the Ospreys scored the game’s first try after Morgan Morris burst free from a scrum and Reuben Morgan Williams set Giles free to race in from 20 metres for the try.

Evans converted to make the score 10-0 before Leinster replied with a Harry Byrne penalty and hooker Dan Sheehan crossed out wide after a period of sustained pressure by the visitors to make it 10-10 at half-time.

After the break, Evans slotted over two penalties before Keenan and O’Brien crossed for tries in the last 15 minutes to finally break the home side’s spirit in Swansea.