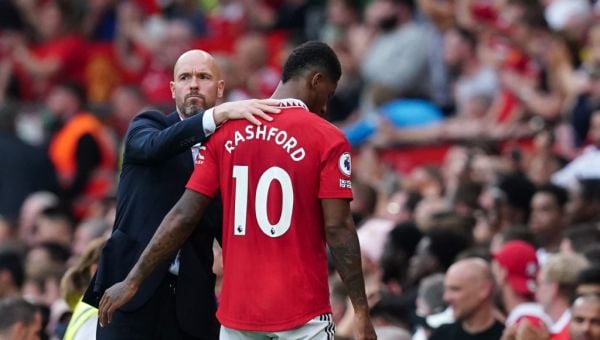 Erik ten Hag has admitted he took a risk when he dropped Marcus Rashford for disciplinary reasons at Wolves last week but the Manchester United boss has been delighted with the response.

Rashford was left out of the starting XI at Molineux on New Year’s Eve after oversleeping and missing a team meeting, but then came off the bench to score the only goal in a 1-0 win.

The England striker has subsequently scored in the 3-0 Premier League win over Bournemouth on Tuesday and Friday’s 3-1 FA Cup victory over Everton – in which he also set up United’s two other goals – to continue his outstanding form.

With five goals in his last five matches, Rashford is up to 13 for the season and on track to top his previous best tally of 22, achieved in 2019-20, if he can stay fit.

Ten Hag’s decision to punish Rashford for his late show before New Year could have backfired if his form had suffered but the manager has been vindicated.

“If you allow them to be undisciplined, if they don’t match the standards, the values and the rules we set together as a team, the staff, the players, the dressing room togetherness, then it will come back and blow up in your face…in my opinion you have to go this way.

“If it’s the right person, the right human being, character, they will react like this. With Marcus I was quite convinced. I have known him for seven, eight months and I could expect this reaction.”

While Rashford is on a roll, Ten Hag wants to use the January transfer window to strengthen his attacking options after the exit of Cristiano Ronaldo, and Friday’s FA Cup tie once again showed why.

Anthony Martial started the match and played well – freeing Rashford to set up Antony’s opener – but was replaced by teenager Alejandro Garnacho in the 71st minute. The Frenchman is yet to complete 90 minutes in any of his 12 appearances this season.

“He can’t match at this moment the load,” Ten Hag said. “There are many games. That’s why we’re looking for another striker. It’s not about we don’t rely on him. But his physical load at the moment is not so high that he can play every three days 90 minutes.

“We have to manage that together with him. Because of his profile and quality Anthony is so important for our game. He’s in the right moments, his ball security, he brings so much to the team. We need his profile to be a threat and also Rashford benefits from that.

“I’m not concerned that only Marcus is scoring goals because I am convinced we have other players who can score – Antony can score, Bruno Fernandes is very capable to go (and score) and Christian Eriksen will create and is capable of scoring so we have more players who can score.”