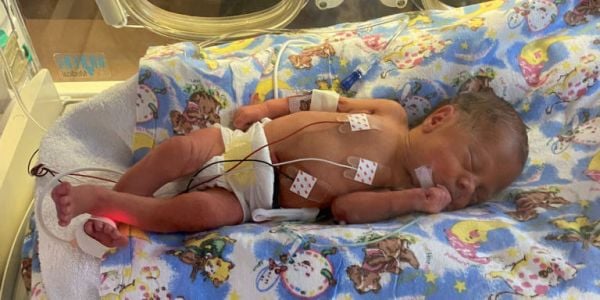 A man whose daughter’s life was saved by a midwifery team is embarking on a marathon effort to help build dedicated hospital rooms for the parents of stillborn and premature babies.

Lauren McCarthy was born nine weeks early, weighing just 3lb, after a midwife discovered an abnormal heart rate during an appointment for her mother Aoife, 33.

Her 37-year-old father CJ McCarthy, from Castlelyons in Co Cork, is now training for the Paris Marathon in April to raise funds for a neonatal sanctum and parents’ room to support other families at the hospital.

The Cork University Hospital Charity is raising funds for the new facilities, which will cost an estimated €1 million.

“We are here to tell the tale of how lucky we are,” Mr McCarthy said.

“There were times when we questioned if Lauren would ever come out of the neonatal unit. In those moments, you are terrified of what’s to come.”

Mrs McCarthy, a radiographer, was attending CUMH for an anti-D injection 31 weeks into her pregnancy in January 2021 when the problem with Lauren’s heart rate was detected.

Two days later, following a scan, the couple was told an emergency Caesarean section was needed.

“She (Lauren) came out at 3lb. I had to go to the neo-natal ward and she was put into an incubator,” Mr McCarthy recalls.

“She was the size of my hand.

“They were challenging times as often it was one step forward, two steps back with her progress.

“However, we were among the lucky ones. Some babies were extremely sick, some parents had miles to travel on a daily basis, we were only down the road in Castlelyons and had great support from our family.”

The new neonatal sanctum will be a structure within the CUMH garden for parents to take a baby in palliative care, or for a seriously ill mother to access.

The parents’ room will be a private area, separate from the unit but nearby, and a place where parents can take some time out from the clinical setting during stressful days.

Both projects will help the parents of babies who are stillborn, premature or suffering from life-limiting conditions at the neonatal unit, which is one of the busiest in Ireland.

“It will give parents a chance to sit down and talk to others going through the same thing,” Mr McCarthy said.

“At a time when they think the whole world is against them, they can go into a room, make a coffee and chat with others in the same boat.”

Lauren will turn two on January 15 and the couple also have daughter, Zara, who is four.

Mr McCarthy, who works for the McCarthy Insurance Group, has run seven marathons, all under four hours.

For more information on his fundraising efforts or to donate visit www.idonate.ie/fundraiser/CJMcCarthy.