Novak Djokovic battles back from the brink to lift Adelaide title 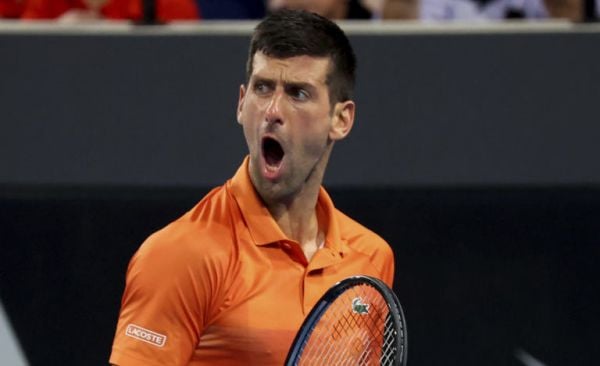 Novak Djokovic warmed up for his Australian Open return by saving a championship point en route to clinching the Adelaide International title with a thrilling victory over American Sebastian Korda.

The Serbian looked in danger of slipping to a surprise defeat before triumphing 6-7 (8) 7-6 (3) 6-4 in a gruelling three hours and nine minutes to extend his winning streak in Australia to 34 matches, dating back to 2019.

Djokovic was deported from the country ahead of the 2022 Australian Open as a risk to public health because of his refusal to receive the Covid-19 vaccine.

But the 35-year-old, who received treatment on his left leg during Saturday’s semi-final win against Daniil Medvedev, will be back in Melbourne this month, chasing a 10th title.

9️⃣2️⃣ trophies and counting 🙌🇷🇸🏆@DjokerNole downs Korda 6-7 7-6 6-4 to earn the title and extend his win streak in Australia to 34 matches.@AdelaideTennis | #AdelaideTennis pic.twitter.com/BF6TRYzDI3

He will arrive there brimming with confidence after lifting the 92nd tour-level trophy of his illustrious career at the end of an absorbing encounter.

Djokovic saved match point at 5-6 in the second set and, having dug in to keep himself in contention, surged through the tie-break to force a decider.

The 21-time grand slam champion tapped his right index finger to his head as a nod to his resilience after victory was sealed when 22-year-old Korda sent a final forehand long.

Djokovic is now tied with Rafael Nadal for the fourth-most men’s singles titles in the Open Era, trailing only Jimmy Connors (109), Roger Federer (103) and Ivan Lendl (94).