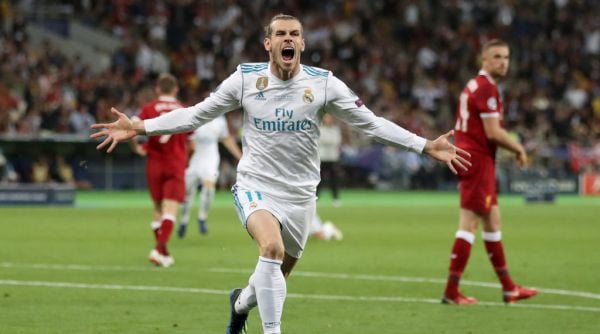 Gareth Bale can look back on some amazing goals after announcing his retirement from football.

Bale scored a record 41 goals for the Wales men’s team and 106 in his trophy-laden Real Madrid career.

A hat-trick at the San Siro was the then 21-year-old’s breakout performance to the world. Spurs were trailing 4-0 by half-time, with goalkeeper Heurelho Gomes already sent, off but Bale’s star showing in the second half meant European champions Inter were clinging on by their fingernails at the end. His opener gave a glimpse of Bale at his absolute best as he raced 50 yards, shrugging off several challenges along the way, before angling a shot past Julio Cesar.

Wales were trailing 1-0 in their ‘Battle of Britain’ World Cup qualifier as the tie ticked into the final 10 minutes. But then Bale grabbed the game by the scruff of the neck, winning and converting an 80th-minute penalty before stunning the Scots in the final minute. Bale drove at the Scotland defence and slipped his way past Charlie Adam before unleashing an angled 25-yard shot into the top corner of Allan McGregor’s net.

Bale scored an incredible solo goal with five minutes of the 2014 Copa del Rey final remaining. Bale outsprinted Barcelona defender Marc Bartra from the halfway line, running off the field at one point. “I had to get round the player and go off the pitch to do it,” Bale simply stated after the game. Having outpaced Bartra, he then scored from a tight angle – the 20th goal of his first season in Spain and his maiden strike in a Clasico fixture.

Bale repaid a vast chunk of his world record £85.3 million transfer fee in the 2014 Champions League final against Real’s neighbours Atletico. With the game having gone into extra-time, Bale found space at the far post after 110 minutes to score with a header after Angel Di Maria’s blocked shot had looped into the air. The goal made Bale the first Welshman to score in a European Cup or Champions League final.

Bale scored twice in the 2018 Champions League final to secure Real’s 13th triumph in the tournament. His first will be remembered for as long as the competition is played, a stunning overhead kick from the edge of the 18-yard box. That put Real 2-1 ahead and Liverpool’s fate was sealed when his speculative long-range effort beat Loris Karius in the Reds goal. Bale became the first substitute to score twice in a Champions League final and was named man of the match.

Bale sent Wales to a 2022 World Cup play-off final with a brilliant double in a 2-1 victory over Austria. First, he sent a majestic pin-point 25-yard free-kick just under the Austrian crossbar to give Wales the lead. Bale struck again by latching on to a loose ball and shooting beautifully on the turn, allowing Wales to progress to a play-off final against Ukraine, which they would win 1-0. Bale was eventually credited with that goal too, after it had initially been given as an Andriy Yarmolenko own goal.