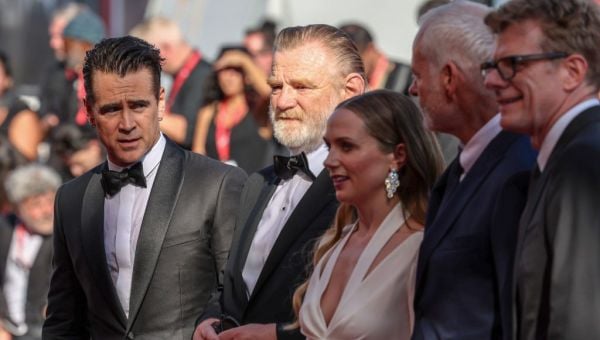 The prize for best film at the National Board of Review awards went to Top Gun: Maverick, while Martin McDonagh’s The Banshees of Inisherin took home the most trophies – but the night belonged to Steven Spielberg.

The 76-year-old filmmaker was named best director for The Fabelmans, and saw a host of Hollywood stars pay tribute to the man and his career during the ceremony in New York City.

Colin Farrell, who was there to accept the award for best actor for his performance in The Banshees of Inisherin, said the experience of first watching Spielberg’s 1982 movie ET was the most euphoric of his life, ranking it even above the births of his two children.

Brendan Gleeson, who stars opposite Farrell, was not there to accept his award for best supporting actor, though Farrell read a letter from him.

Gleeson remarked on the success of Martin McDonagh’s movie: “Happy days for a sad film.”

McDonagh was also honoured with the award for best original screenplay. Oscar Isaac, who stars in the playwright’s next film, introduced McDonagh by recalling his first meeting with him at a London pub, an encounter that ended in the two sharing mushrooms.

Once he reached the stage, McDonagh thanked Isaac “for revealing only one of my drug preferences”.

McDonagh then made one of the night’s most pointed remarks, applauding his film’s distributor, Searchlight Pictures, for giving him no notes on the screenplay: “Which is probably why I’m up here tonight.”

Despite the lack of a televised broadcast from Cipriani’s 42 Street in midtown Manhattan, the National Board of Review Awards have long been a regular and star-filled stop in Hollywood’s awards season.

This year’s ceremony, hosted on Sunday night for the seventh time by Willie Geist, came right in the thick of a battery of big dates on the Oscars calendar.

The Golden Globes are on Tuesday, the Screen Actors Guild nominations take place on Wednesday, and voting for the Academy Awards starts on Thursday.

The NBR Awards, held by a long-running group of film enthusiasts, offer a chance to stoke buzz and polish acceptance speeches.

The National Board of Review makes it easier, too, by announcing winners in advance and pairing each with a lavish introduction from a collaborator or friend.

Spielberg was introduced as best director winner for his movie-memoir The Fabelmans by West Side Story star Ariana DeBose.

DeBose recalled being in a nail salon when “Steven (expletive) Spielberg” called to ask if she would join the cast.

She added: “What I remember most about that moment, aside from the experience of realising that blood was rushing to my head and to my feet simultaneously, was thinking: Wow, what a gentlemanly, respectful, generous call that that was to make. To ask someone to join you in an adventure.”

Gabriel LaBelle, who plays a fictionalised version of young Spielberg in The Fabelmans and was honoured for breakthrough performance along with Till star Danielle Deadwyler, similarly described the life-changing nature of a call from Spielberg.

“I feel like I’m in debt, like I owe you, like I owe you my first born child or something,” LaBelle said, still in apparent disbelief at his turn of fate. “I don’t know how I’ll ever pay you back.”

When Spielberg took the stage, the crowd rose in a standing ovation.

He said: “My whole career in all the films I’ve directed – my job, as I have seen it – is as the accompanist and the conductor to whoever or whatever should be the centre of your attention.

“But when it came time for me to sit down with Tony Kushner to explore the possibilities of a story that became The Fabelmans, I realised for the first time that I couldn’t take cover behind a mothership or a T-Rex or a big mechanical shark that never worked.”

Much has been made about The Fabelmans being Spielberg’s most personal film, a classification he did not dispute. Although he noted that every movie, in any genre, can be personal to a director, Spielberg said making his latest “was like moving back in with my parents and my sisters”.

Though Spielberg is renowned as a hit-maker, The Fabelmans has struggled to ignite at the box office with just $15.1 million worldwide, sapping some of its Oscar momentum.

Meanwhile, the awards hopes for a pair of theatrical successes – Top Gun: Maverick and Everything Everywhere All at Once – have risen.

Top Gun star Tom Cruise did not attend the NBRs, but producer Jerry Bruckheimer applauded him while accepting for best film.

“Simply put: He’s a force of nature,” Bruckheimer said. “A man with one goal: to entertain audiences.”

After being introduced by her Crazy Rich Asians co-star Awkwafina, Everything Everywhere All At Once star Michelle Yeoh accepted the award for best actress.

The Malaysian-born Yeoh noted she was the first Asian to win the award in nearly five decades, something that caused her to reflect on her journey from Hong Kong to Hollywood.

“One day Hollywood did come calling. It was an absolute dream come true. We all wanted to go to Hollywood – until I got there,” Yeoh said.

“Suddenly, I was a minority. I mean, how did that happen? There are more of me than you! I was typecast. I didn’t see faces like mine on the screen. I met with people who didn’t know where Korea and China and Japan were.”

Her introduction came from Benoit Blanc, himself: Daniel Craig. “Are you kidding me?” Monae exclaimed. “You guys got James Bond?”

#SiennaMiller presented the NBR award for Best Adapted Screenplay to #LesleyPatterson and #IanStokell for their adaptation of ALL QUIET ON THE WESTERN FRONT @allquietmovie — fun fact: the 1930 version of the film made NBR’s #NBRtop10 ! #allquietonthewesternfront pic.twitter.com/wKH8WmTygY

Craig said of his Glass Onion co-star: “When Janelle floats, when she glides into a room, the chemicals in the air change.

“When I had the privilege of working with her, every day she lifted me up.”