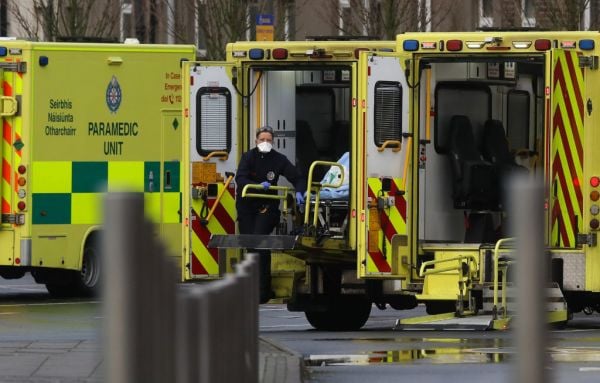 Acting HSE chief executive Stephen Mulvaney warned in recent days that the precarious situation could get worse before it gets better, with a further 611 in hospital at the weekend with Covid-19.

A further 35 people are in ICU with the virus as the healthcare system has been dealing with record overcrowding over the past few weeks.

It comes as the Irish Examiner reports, 260 people were waiting for a bed in hospitals across the country on Sunday –  with 139 people waiting for more than nine hours – as hospital staff and administrators alike brace themselves for potentially another record week of overcrowding.

University Hospital Limerick (UHL), which has been one of the worst hit by the overcrowding crisis, today launches a pilot project aimed at easing the pressure, with Ennis Hospital doctors and paramedics assessing emergency call patients there to judge whether they then need to go to Limerick or not.

If the pilot scheme is deemed successful in Limerick, it is envisaged that it could then be rolled out in other hospitals.

St Vincent’s University Hospital in Dublin was the worst affected as of Sunday, with 30 patients waiting, 21 of them for more than nine hours.

The Irish Nurses and Midwives Organisation (INMO) said it is to consult its members on industrial action this week, as it seeks what it called safe staffing levels underpinned with legislation.

General secretary Phil Ni Sheaghdha told RTÉ radio that there is currently an inability to keep its members safe while at work.

"We know that there is an inability to act fast enough, despite all of the issues being raised in the middle of the summer of this year, both with the HSE and the Department by our union. We still have the same problem that was entirely predictable, and is simply not good enough to expect staff to just put up with that," she said.