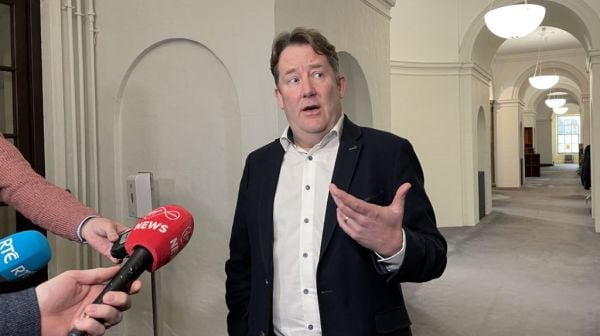 The Minister for Housing has said that he is “disturbed” by protests held outside a centre in a north Dublin suburb where migrants were being housed.

Videos emerged on social media over the weekend of a crowd of people gathered outside a building in Ballymun where families were living, chanting “get them out”.

One person was seen holding a sign saying “Ireland is full”.

Speaking to reporters on Monday, Darragh O’Brien said he was concerned by the scenes over the weekend.

“I’m very disturbed by them, frankly,” he said.

“We’ve been a welcoming country, and rightly so. We know from our own history what it’s like to be people who’ve had to leave our own shores due to oppression, due to war, due to famine.

“And the vast majority of people living in Ireland here are people who support the effort to look after our friends from Ukraine and indeed from other countries where people are fleeing persecution.

“So, it concerns me to see that, to be very frank, and I think that if people have a different viewpoint, they’re entitled to it, but they’re not entitled to intimidate people.”

Similar protests have been held in East Wall in recent months, with locals claiming there was not enough consultation prior to migrants moving into an old ESB building.

As of January 2, Ireland is housing more than 51,955 Ukrainian people who have sought accommodation from the State and more than 19,300 asylum seekers – a significant increase in the numbers recorded in previous years.

Around 1,500 Ukrainians and asylum seekers arrived in Ireland over the Christmas period, and despite a government pledge to stop housing people in tented accommodation, 88 people were in tents in Co Clare as of last week.

The government has said that the numbers arriving in Ireland has resulted in “the largest humanitarian effort in the State’s history”.

This, coupled with the housing crisis, has put severe pressure on the State’s ability to house those in need of accommodation.

As of November, there were 11,542 people recorded as homeless – the fifth consecutive month where a new record high has been reached since the Department of Housing began recording the number of people in emergency accommodation.