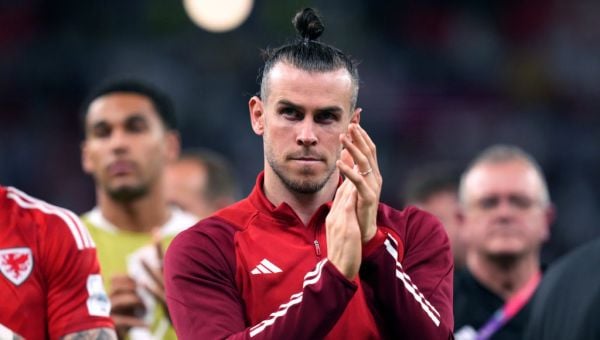 Gareth Bale has announced his retirement from football.

Bale, 33, wrote on his social media accounts: “After careful and thoughtful consideration, I announce my immediate retirement from club and international football.

“I feel incredibly fortunate to have realised my dream of playing the sport I love.

“It has truly given me some of the best moments of my life. The highest of highs over 17 seasons, that will be impossible to replicate, no matter what the next chapter has in store for me.”

Speculation over Bale’s future has constantly been debated in recent seasons with his playing time at club level limited but his importance to Wales has never waned and he fired them to a first World Cup since 1958 with a deflected winner against Ukraine last summer.

He left Real Madrid not long after to sign for Major League Soccer outfit Los Angeles FC and scored in his final club outing in November to help them win the MLS Cup with a penalty shoot-out success over Philadelphia Union.

It would prove the 17th trophy won by Bale during a glittering career and provided him with momentum ahead of Wales’ historic return to the world stage this winter.

Bale scored from the penalty spot in his country’s 1-1 draw with USA, but defeats to Iran and England saw Wales bow out in the group stage in Qatar.

While the five-time Champions League winner insisted that he may carry on, the Cardiff-born attacker has now decided to hang up his boots.

“My decision to retire from international football has been by far the hardest of my career,” Bale said.

“My journey on the international stage is one that has changed not only my life but who I am. The fortune of being Welsh and being selected to play for and captain Wales, has given me something incomparable to anything else I’ve experienced.

“I am honoured and humbled to have been able to play a part in the history of this incredible country, to have felt the support and passion of the red wall, and together have been to unexpected and amazing places.

“Thank you to every one of you for being on this journey with me.

“So for now I am stepping back, but not away from the team that lives in me and runs through my veins. After all, the dragon on my shirt is all I need.”