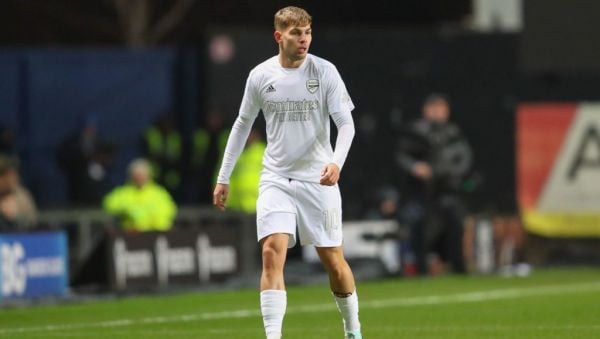 Emile Smith Rowe believes Arsenal can use defeat at Tottenham last season as added motivation for the trip to their local rivals this weekend.

The Gunners were comfortably beaten 3-0 at Spurs back in May, losing the impetus in the fight for a top-four finish and ultimately missing out on the Champions League.

This season, however, Mikel Arteta’s side sit five points clear at the Premier League summit and have lost just one of their 17 games so far.

They make the short trip to the Tottenham Hotspur Stadium on Sunday afternoon looking to maintain their lead at the top of the table, with fit-again Smith Rowe admitting the stinging loss eight months ago is still fresh in the memory.

“We are going to train really hard and we will use the energy, how we felt last year, and use it going into the game,” he said.

“I feel like maybe (we will use the defeat in the build-up to this game) but obviously most of us already know how it felt back then.

“A win would be massive for us. I think it couldn’t come at a better time. We are feeling really good at the moment.

“All the boys know what it means to play in these kind of games. We are all going to rest up now and get ready for it.”

The 23-year-old underwent groin surgery to rectify an issue he revealed has been plaguing him since a loan spell at RB Leipzig in 2019.

“It has been quite hard to deal with it over the years. But I am really happy that it is just finally over. I had a successful surgery and I am really feeling really good.

“It was the exact same pain from back then, which has been quite hard to manage. Obviously a lot of people might not know about that from over the years. But I am just happy to come out the other side fully fit.

“I have been itching to get out there and play with the boys. I hope I can make an impact. I hope we can have a great rest of the season.

“It has been difficult being out for this long. I don’t think I have had this (long lay-off) before and it has been tough watching the boys. But at the same time we are top of the league and playing really well, so I can’t complain.

“I was pretty much with them from the start to be honest after surgery. I was in all the meetings and stuff, trying to keep up with the knowledge and learning every day what he (Arteta) was trying to apply in training. It has been much easier than I thought. I am just happy to be back now.”