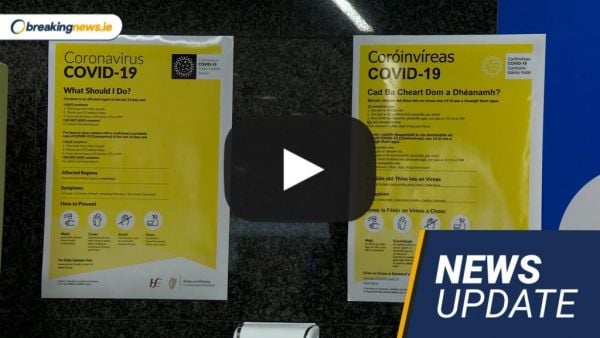 A new Covid-19 variant XBB.1.5, an offshoot of Omicron nicknamed ‘Kraken’, has been detected in Ireland.

The variant is being tracked in several countries amid concerns it is highly contagious and better at getting around protection from vaccines and previous infection, although its full impact has yet to be assessed.

The new strain has been causing concern internationally.

A leading immunologist has said the latest variant of Covid-19 transmits well, but there’s no evidence to suggest it is any more severe.

Professor Paul Moynagh from Maynooth University said the XBB.1.5 strain is likely to spread here, as cases increase in the US.

A Co Westmeath-based secondary school has returned to the High Court claiming that teacher Enoch Burke has again breached the terms of an order preventing him from attending at its premises.

In a motion brought before the court Wilson’s Hospital secondary school is seeking an order sequestering or removing Mr Burke’s assets from him, rather than seeking to re-activate the order committing the Co Mayo teacher to prison.

Mr Justice Tony Hunt was told on Tuesday by Rosemary Mallon BL for the school that, in breach of court orders made last year, Mr Burke attended at Wilson’s Hospital School premises last week when staff and students returned from the Christmas holidays.

He has returned to the school on several subsequent days, counsel added.

The Food Safety Authority of Ireland (FSAI) issued 77 enforcement orders on food businesses last year, an increase of 31 per cent on 2021’s figures.

In 2022, the FSAI served 65 Closure Orders and 12 Prohibition Orders for breaches in food safety legislation.

A number of recurring safety issues resulted in the issuing of enforcement orders, the authority said, including improper storage of food with risk of possible contamination, a lack of pest control procedures, monitoring and pest proofing, and a lack of proper temperature control in the storage.

Other breaches related to preparation and distribution of food and inadequate staff training in relation to food safety, personal hygiene and record keeping.

Fans queued to buy a hardback copy of the Prince Harry’s autobiography as it hit shelves at midnight.

Shops across the UK reopened at 12am on Tuesday for the official release of Harry’s controversial memoir Spare, which was leaked and also sold early by some book shops in Spain last week.

A handful of people waited outside WH Smith in Victoria station, central London, to be one of the first to buy a copy of the book, which contains a flood of bombshell revelations and intimately private details about Harry’s life and family.

Shop staff opened the doors to a swarm of reporters and customers who gathered around stacks of the book, which were sitting on a table wrapped in sealed black packaging.