British government criticised for ‘petulance’ after McDonald excluded from talks 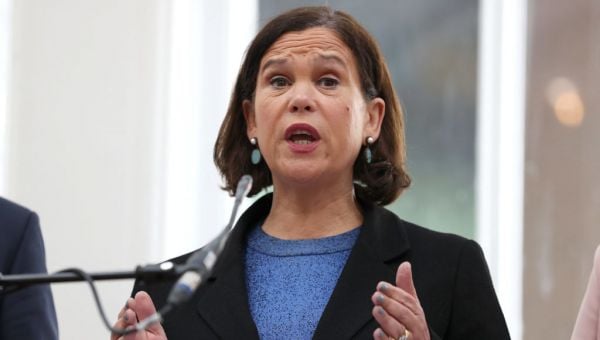 Sinn Féin has said there is “no room for bad faith and petulance” from the British government in talks regarding Northern Ireland.

The meetings are taking place in an attempt to restore the North’s power-sharing Executive and discuss possible solutions regarding the Northern Ireland Protocol.

This is a time for inclusive, good faith engagement. It is regrettable & bizarre that the British Govt chose to exclude the leader of Sinn Féin from today’s party leaders meeting. I remain determined to work constructively with all to get the Executive & Assembly working for all

A statement from Sinn Féin said the decision to exclude Ms McDonald from the talks was made by the British government late on Tuesday night.

The party welcomed progress in discussions between the EU and UK earlier this week, adding it had hoped to build on that progress. However, “in an extraordinary turn of events” they were informed that Ms McDonald was not invited to partake in Wednesday’s meetings.

“There is no time to waste, we are in the grip of a cost of living crisis, and our health workers and patients are crying out for political leadership and the restoration of the Executive.

This is a time for inclusion, dialogue and engagement. There is serious and urgent work to be done. This is a time for mature and civil politics. There’s no room for bad faith and petulance from the British government.

“Sinn Féin’s priority is to work together with the other parties and the two governments to get the job done,” the party’s statement said.

Sinn Féin said there remains “serious work to be done” and officials must “pull out all the stops to get the Executive back up and running and working together for all our people”.

It added that its members look forward to engaging with both Taoiseach Leo Varadkar and UK Labour leader Keir Starmer on Thursday.

Following the news of Ms McDonald’s exclusion, the SDLP tweeted it would not take part in Wednesday’s discussions.

“The SDLP has always stood by the principle of maximum inclusion in talks. We will not take part in a process today that excludes the leader of Sinn Féin.”

The British Government should be seeking an inclusive consensus on how we make progress, that can’t be achieved by excluding the Leader of Sinn Féin.

This was a mistake but it can, and should, be rectified. We all need to work together to restore government. https://t.co/gmTdVtLKhQ

The party added it has proposals to restore the Stormont Assembly which it wants to put to other parties in inclusive talks. “That needs to happen.”

SDLP leader Colum Eastwood later added: “The British government should be seeking an inclusive consensus on how we make progress, that can’t be achieved by excluding the leader of Sinn Féin.

“This was a mistake but it can, and should, be rectified. We all need to work together to restore government.”

“The leader of Sinn Féin in the Assembly (Michelle O’Neill) was invited and remains invited.

“Her attendance is a matter for Sinn Féin, but she was not excluded.”

DUP leader Jeffrey Donaldson and Mr Eastwood were both invited to the talks despite them not being MLAs, but rather MPs in the British parliament in Westminister representing constituencies in the North.

Unionist parties and the cross-community Alliance Party have said they will proceed with the talks.