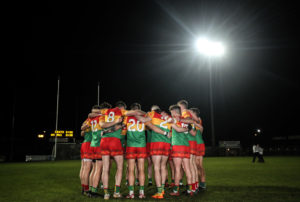 The Carlow team huddle together before the first O’Byrne Cup game of the year against Meath
Photo: ©INPHO/Evan Treacy

CARLOW’S final O’Byrne Cup game, due to take place against Laois in Stradbally on Wednesday, will now not go ahead as planned and will instead be rescheduled for the weekend.

In a statement released just after 11.30am on Wednesday, Leinster GAA said:

Game will be rescheduled for this weekend.  Full details/arrangements will be confirmed later.”

Full details will released on the Carlow Nationalist website as soon as they are confirmed.