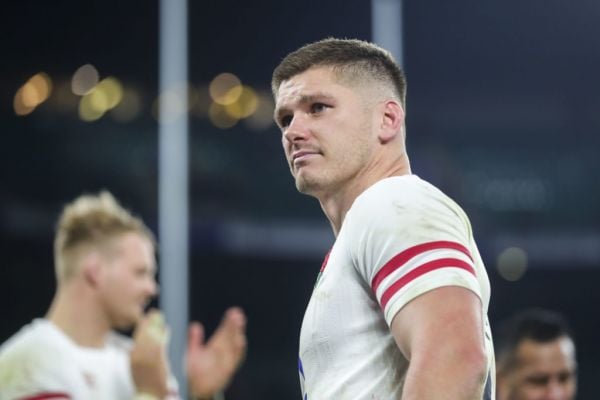 Owen Farrell will be available for the start of England’s Six Nations against Scotland on February 4th after receiving a four-match ban for a dangerous tackle.

Farrell faced a disciplinary hearing on Tuesday night after his shoulder made contact with the head of Jack Clement in the 75th minute of Saracens’ Gallagher Premiership victory over Gloucester on Friday.

Although the four-match suspension would prevent him from running out at Twickenham in Steve Borthwick’s first match in charge, it will be reduced to three games if he completes World Rugby’s coaching intervention programme.

This will be reduced to a three week ban if the player completes the World Rugby Coaching Intervention Programme.#YourSaracens💫

By doing so, the England captain will be able to resume playing after Saracens’ Premiership clash with Bristol on January 28th.

However, if Farrell is picked in Borthwick’s squad for the Six Nations when it is announced on Monday, the panel will be forced to revise what constitutes the ‘meaningful’ fixtures that make up the ban.

Saracens’ outings against Lyon, Edinburgh, Bristol and Leicester have been identified as the relevant games, with the Scotland clash omitted on the basis that England’s squad for the competition has yet to be picked.

Under normal circumstances, any player included in the Six Nations squad does not feature for their club the weekend before, so if Farrell is chosen by Borthwick on Monday the Bristol match theoretically no longer becomes relevant to the ban.

However, England could circumvent this by saying it was their intention to release Farrell back to Saracens to play against Bristol. The alternative is that Farrell, who told the disciplinary panel that he would take the tackle technique coaching course, misses the Scots’ bid to retain the Calcutta Cup.

“Should those games be cancelled or rearranged, or should there be a change of circumstances, then it will be the responsibility of the parties to consider the position and to ensure that the sanction imposed by this panel remains meaningful,” the panel said in the judgement accompanying its verdict.

“If necessary, the player’s free-to-play date will be amended to ensure the sanction remains meaningful. That responsibility was made clear to the parties during the hearing.”

Farrell accepted the charge that his tackle on Clement was dangerous but argued that it was not a red card offence.

The disciplinary panel disagreed, however, and decided there was no mitigation as Farrell had clear line of sight and time to adjust his height as he attempted to make a dominant tackle.

The challenge was deemed reckless rather than intentional and mid-range in severity, resulting in a six-match ban. This was reduced by two weeks due to the apology made to Clement, a strong reference from Saracens boss Mark McCall and his conduct.

The fact he served a five-week ban for the same offence in 2020 meant he was unable to receive the full mitigation because of a 50 per cent reduction in the length of his ban.

Farrell is competing with Marcus Smith and George Ford for fly-half duties and is also England’s current captain, although Borthwick may appoint a new skipper.