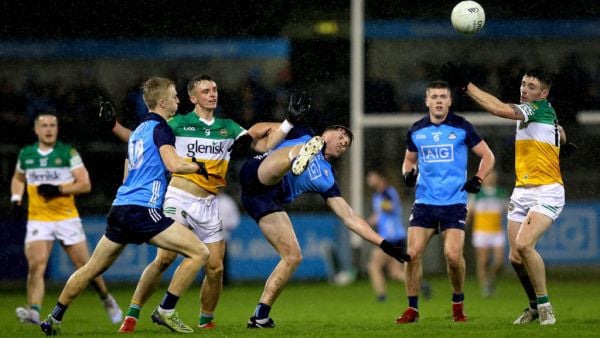 Longford are through to the final of the O’Byrne Cup following a draw with Meath in Ashbourne.

Donal Lenihan gave the Royal County an early lead with a goal after two minutes.

However, a more consistent showing from Longford sees the Midlands county into the final.

Elsewhere in the O’Byrne Cup, Offaly saw off the challenge of Dublin on a wet evening in Parnell Park.

All over here at Parnell Park. Hard luck to our footballers 👕#UpTheDubs pic.twitter.com/b3CvCugVDJ

A last-gasp score from Lachlan Murray salvaged a draw for Derry against Tyrone, sending the Oak Leaf County into the semi-finals of the Dr McKenna Cup.

Sensational equalising score from Lachlan Murray with the last kick of the game to cap off a battling second-half performance from the Oak Leafers that sends us into the semi-final 👏🇦🇹#McKennaCup pic.twitter.com/N9a8kOIz5D

The Bank of Ireland Man Of The Match Dara McVeety, accepting his award from Ulster GAA Treasurer Declan Woods and Bank of Ireland’s John Brady.#BOIMcKennaCup2023 pic.twitter.com/jl56qIBc2L

Donegal lost out to Monaghan, also in the Dr McKenna Cup, despite two goals from Joel Bradley Walsh.

Massive congratulations to @CarrickEmmets Stephen O Hanlon who was named the @BankofIrelandUK @UlsterGAA Man of the Match at tonight’s Dr McKenna Cup Game against Donegal in Ballybofey pic.twitter.com/w0EuLhkaAv