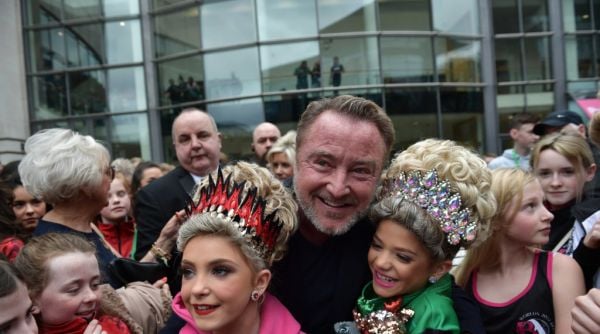 Riverdance and Lord of the Dance star Michael Flatley has been diagnosed with “an aggressive form of cancer,” it has been announced.

In a statement released to the media and posted on social media, it was revealed that the 64-year-old Irish-American has undergone surgery and is in the care of an excellent team of doctors.

“No further comments will be made at this time. We ask only for your prayers and well wishes. Thank you.”

It is not known if the diagnosis is in any way linked to treatment Mr Flatley received for skin cancer in 2003.

The retired dancer gave an interview to the Brendan O’Connor Show on RTÉ Radio 1 last week.

During the interview he said that he had spent the Christmas period at his home in Castlehyde in Fermoy, Co Cork with his wife Niamh and son Michael St James.

The Chicago-born entertainer primarily lives in Monte Carlo in Monaco but also has homes in the UK, the USA, France and Barbados.

He bought Castlehyde House, which sits on the banks of the River Blackwater in Fermoy, for £3 million in 1999. It is the ancestral home of the first Irish president Douglas Hyde and is regarded as one of the finest examples of Georgian architecture in the south-west. It underwent a substantial renovation following its purchase.

Mr Flatley tied the knot with fellow Irish dancer Niamh O’Brien in Fermoy in October 2006. The ceremony was held at St Patrick’s Church, two miles from his home in Castlehyde. Their son, Michael St James, was born in 2007.

In an interview with the Sunday Independent in 2010, Flatley said the purchase of Castlehyde was his best ever impulse buy.

“We were flying [in a helicopter] down on the way to west Cork, and he flew over this magnificent land; it looked so rich and so beautiful, and I said, ‘This must be Tipperary.’ I’d always heard about the great land in Tipp, and the pilot said, ‘No, this is north Cork, the Blackwater Valley.’ It just sounded so romantic.

Then he flew over the roof of this house, and I said, ‘What is that?’ and he said, ‘It’s a place called Castlehyde,’ and I asked him to land the chopper and the guy who was with us, the English guy, said, ‘You can’t land your helicopter on people’s front gardens,’ and I tapped the helicopter guy on the shoulder, and he was a Dub, and he said, ‘We’re taking her down,’ and I bought the house.”