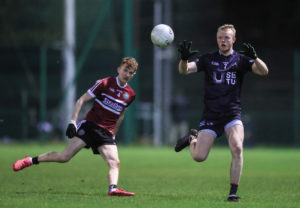 SETU Carlow fell to defeat in their first game of this year’s Sigerson Cup after they were a distant second best in the second half of the game played on their home pitch on Tuesday evening.

The opening half had been closely contested, indeed, Carlow held a one point lead when they lost a player to a black card in the 20th minute and ended up conceding the last three points of the half while down a man.

However, they could have no complaints about the result given the dominance their Ulster rivals enjoyed in the second, particularly in the last 20 minutes.

Farrell, from a free, and Eoin Murtagh then scored to put Carlow back into the led by the midway point of half.

A huge moment in the game arrived in the 20th minute when a poor short kick out by Carlow goalkeeper Matthew Byron was intercepted, leaving corner back Paraic Deering with little option other than to make a lunging tackle, resulting in a black card and leaving Carlow down a man.

Despite that, Murtagh’s second point of the half left Carlow 0-6 to 0-4 ahead in the 24th minute but after that, St Marys rattled off three points.

Carlow did a have the game’s best chance of goal once back to 15 men, in first half injury time. Daragh Galvin did superbly well to pick up a loose ball in midfield and feed it forward to Adam Steed. The Kildare man made great ground inside the St Marys 45 but as he bore down on goal, the excellent Charlie Smyth stood big in goal and narrowed the angle and Steed’s shot could only hit the side netting.

St Marys went 0-8 to 0-6 ahead early in the second half but Carlow were able to rally and pulled level with points from Hulton and Farrell.

That pair was to be their last scores of the game however and St Marys gradually pulled away in the last 20 minutes, in the end scoring the last six points of the game.

SETU Carlow now await to see who loses Wednesday evening’s game between MTU Kerry and ATU Sligo to see who they will play next in the competition.