Sinn Féin ‘were not excluded’ from meeting with Foreign Secretary 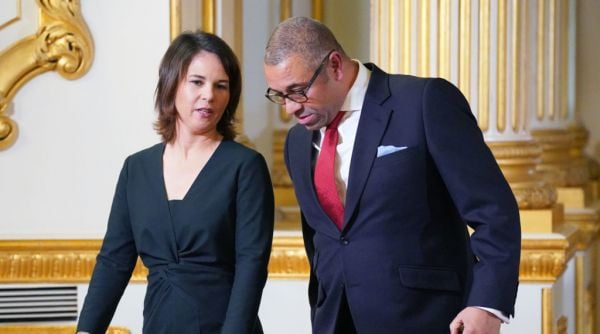 UK Foreign Secretary James Cleverly has insisted Sinn Féin were not excluded from a meeting with him in Belfast.

It came after the party said its leader, Mary Lou McDonald, was told she could not attend the meeting to discuss the Northern Ireland Protocol and the Stormont political deadlock.

Mr Cleverly said Sinn Féin vice president Michelle O’Neill, an elected member of the Northern Ireland Assembly, was invited to attend but opted not to.

Mrs McDonald, who is elected to the Dáil, accused the British Government of “Tory petulance” and said the situation was “bizarre and unprecedented”.

The party withdrew from the roundtable talks with Mr Cleverly on Wednesday.

The discussion, which included Northern Ireland Secretary Chris Heaton-Harris and also focused on the Stormont powersharing crisis, were overshadowed by the row.

Mr Cleverly stressed the meeting was to hear from political representatives in Northern Ireland and he would meet Irish politicians when he goes to Ireland “in the near future”.

During a visit to Saintfield Garden Centre on Wednesday afternoon, he told media: “Sinn Fein were very welcome.

“Michelle O’Neill was invited, as was her deputy. They chose not to come but it was a very useful meeting and I did get to hear voices that had concerns, serious concerns, about the protocol, the impact it is having on people and businesses in Northern Ireland.”

This is a time for inclusive, good faith engagement. It is regrettable & bizarre that the British Govt chose to exclude the leader of Sinn Féin from today’s party leaders meeting. I remain determined to work constructively with all to get the Executive & Assembly working for all

The two Government ministers had been expected to meet representatives of all the main parties in Northern Ireland to discuss the impact of the post-Brexit protocol.

Instead the meeting went ahead with the unionist DUP and UUP and the cross-community Alliance party present.

The nationalist SDLP joined Sinn Fein in refusing to attend.

Ms McDonald spoke to the media in Belfast while the talks were taking place nearby.

She said: “We are in a very important time when progress needs to be made on the issue of the protocol, on getting the executive back up and running, getting the Assembly into action and ensuring people have government.

“We had hoped to make progress on those issues at today’s leaders’ meeting.

“I travelled for that meeting because I believe it is an important meeting and, bizarrely and in an unprecedented way, the British Government chose to seek to exclude the leader of Sinn Fein from a leaders’ meeting.

“The whole thing is absolutely bizarre and unacceptable.

“We need politics which is civil, which is based on respect, which recognises the democratic mandate and the responsibility of every party, including Sinn Fein.”

Ms McDonald added: “We had a chance this morning to mark progress, to exchange views, to be constructive, to work together, to listen to each other.

This is a time for inclusion, dialogue and engagement. There is serious and urgent work to be done. This is a time for mature and civil politics. There’s no room for bad faith and petulance from the British government.

“But rather than having that kind of meeting, a kind of British Tory petulance has emerged. I think that is a terrible shame.”

“The leader of Sinn Fein in the Assembly (Michelle O’Neill) was invited and remains invited.

“Her attendance is a matter for Sinn Fein but she was not excluded.”

Speaking after the meeting, DUP leader Sir Jeffrey Donaldson said he did not want to get drawn into the row but no party was excluded.

He said: “That is a matter between the Northern Ireland Office and Sinn Fein.

“My understanding is the NIO (Northern Ireland Office) didn’t exclude any party.

“That is not a matter for me. I am not going to get drawn into this.

“It is better when all parties are at the table. I want to see all parties in Northern Ireland putting their views across, particularly to the Foreign Secretary.

“I hope next time the parties will be back at the table.”

Mr Donaldson said he believes Mr Cleverly recognises any deal on the protocol has to be acceptable to unionists.

He said: “This was an invaluable opportunity for us to put forward our concerns about the ongoing negotiations.

“They talked about getting a deal that works for everyone and works for Northern Ireland and I think that is fundamentally important. They recognise a deal with the EU which doesn’t work for unionists just isn’t going to fly.

Ulster Unionist leader Doug Beattie said he pushed for more input from local politicians in the negotiations between the EU and the UK Government over the protocol.

He said: “We need to be in a position that if they are going to agree something, we have the ability to say that is not going to work.

“That is a red flag and I made that point quite strongly to the Foreign Secretary.”

Devolution in Northern Ireland has been in flux since last February when the DUP, the region’s largest unionist party, withdrew its first minister from the ministerial executive in protest at the protocol.

The party has made it clear it will not allow a return to powersharing until radical changes to the protocol are delivered.

It claims the treaty has undermined Northern Ireland’s place within the United Kingdom by creating economic barriers on trade entering the region from Great Britain.

However, earlier this week, progress between the EU and the UK on post-Brexit data-sharing was hailed as a positive step in ongoing talks to find a solution to the row.