Exclusion of party leaders from Protocol meetings must end – McDonald 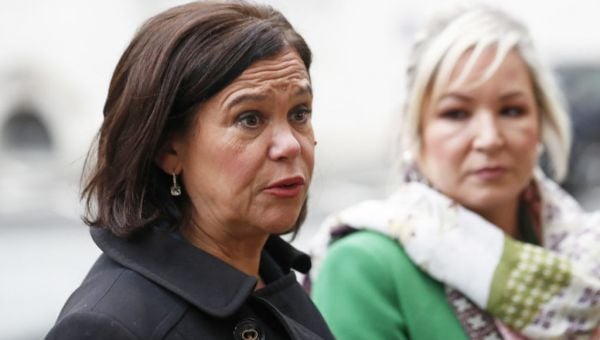 The idea of excluding party leaders from meetings over the Northern Ireland Protocol needs to be “knocked on the head now”, Sinn Féin leader Mary Lou McDonald has insisted.

She was speaking after Northern Ireland Secretary Chris Heaton-Harris defended a decision not to invite her this week to roundtable talks with UK foreign secretary James Cleverly, which also discussed the Stormont powersharing crisis.

Mr Heaton-Harris said it may not have been wise to have the Sinn Féin president, who is the leader of the opposition in the Republic, because she is a “representative of a parliament in an EU member state”.

The UK government and EU are involved in negotiations to resolve differences over the protocol.

The row led to Sinn Féin and the SDLP refusing to attend the meeting on Wednesday and has overshadowed a series of talks to discuss how to resolve issues caused by the post-Brexit trading arrangement.

The UK government has also suggested that, due to diplomatic protocol, Mr Cleverly could not meet Mrs McDonald before he had met his counterpart in Ireland, Micheál Martin.

But Mr Martin said he would have had no issue with the Sinn Féin leader attending the meeting.

Speaking on Thursday, Mrs McDonald said: “All of us know that the way that we make progress is together, that’s how this works, that’s what the history of the last 25 years reflects, so any idea of excluding anybody, excluding the leader of any party, needs to be scotched and knocked on the head now.”

She also confirmed she had written to UK prime minister Rishi Sunak about the issue.

Responding to the controversy, Mr Heaton-Harris said: “Sinn Féin were invited, it is a shame (Sinn Féin vice president) Michelle (O’Neill) didn’t come along because it was an update on the protocol discussions.

“There are many factors which go into the thought process. One, to be quite frank, is that the UK Government is negotiating with the European Union.

“We wanted to update Northern Ireland parties on that negotiation and, with the greatest of respect, Mary Lou is a representative of a parliament in an EU member state.

“That might not have been seen as a wise thing to do.”

Mr Heaton-Harris said he had extended an invite to dinner to Mrs McDonald.

Responding to the dinner invitation, Ms O’Neill said: “We’re not interested in dinner.”

Speaking about the row following a meeting with the Northern Ireland Secretary, Mr Martin said: “We certainly got no heads-up in relation to that at all, and I think it needs to be stated.

“I would have had no difficulty that Mary Lou McDonald was at that meeting, but that’s a matter for the Foreign Secretary.”

Alliance Party deputy leader, Stephen Farry, was asked about Mr Heaton-Harris’s contention that it would have been unwise to invite Mrs McDonald to Wednesday’s meeting.

“I think he needs to back down from that,” he said.

“The Government made a mistake in terms of how they handled the talks yesterday, their position on that is not tenable.

“They need to recognise the subtleties of the situation in Northern Ireland and the reality that Sinn Féin is organised on an all-Ireland basis.

“The Government need to de-escalate their language and they need to climb down and find a means of ensuring that we have proper inclusive talks at the next opportunity.”

Ulster Unionist leader Doug Beattie said he hoped that all political parties from Northern Ireland would take part in future talks with the UK government.

“I wanted to hear what they had to say. I wanted us all to work together.

“And I’ve said this before, boycotts do not work of any shape or form. So whether it’s the DUP boycotting the executive or any other party boycotting talks, it simply won’t work.”

But DUP leader Sir Jeffrey Donaldson made the point that Ms O’Neill, Sinn Féin’s Stormont leader, was invited to the talks and decided not to go.

He told the BBC: “If we are into a situation where Michelle O’Neill can only attend meetings with UK Government ministers if she is accompanied by the leader of Sinn Féin in Dublin, if she has to have a minder with her, that has very serious implications for future arrangements in Northern Ireland if Michelle O’Neill were to become the first minister.”

SDLP leader Colum Eastwood accused the British government of being responsible for an “absolute mess”.

He said “When you are in a hole, stop digging, that is my advice to the Secretary of State.”