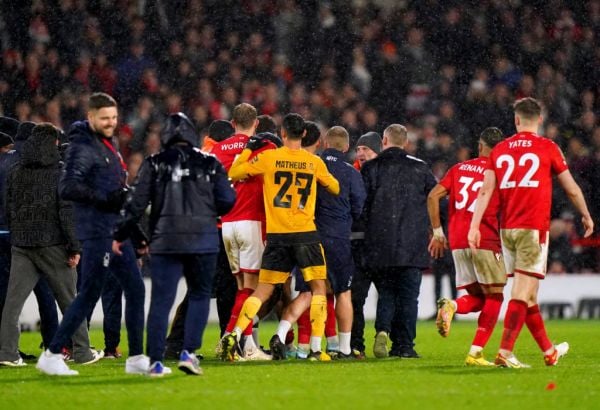 The English Football Association (FA) is reviewing the mass brawl between Nottingham Forest and Wolves at the end of their Carabao Cup quarter-final, the PA news agency understands.

After Forest had won a penalty shoot-out to secure their path to the last four, both sets of players were involved in a melee, with stewards forced to run on to the City Ground pitch to intervene.

Forest forward Morgan Gibbs-White, playing against his former club, appeared to be in the thick of the action, having celebrated his side’s win in front of travelling supporters who had booed him.

The FA will review the referee’s report when it arrives and video footage but a charge would appear highly likely.

Forest boss Steve Cooper did not want to discuss the issue after his side’s win, which set up a two-legged semi-final with Manchester United.

“I am not going to deny there wasn’t one because there was but why it happened and how it happened and what happened, if I speak about it I wouldn’t be completely clear because I don’t know,” he said.

“So I shouldn’t really say anything.”

It was an ill-tempered game as there was an earlier low-key melee that saw Nunes Matheus, Daniel Podence and Serge Aurier booked after Wolves were denied a late penalty.