In response to protests, East Wall locals seek to welcome refugees with ‘solidarity’ 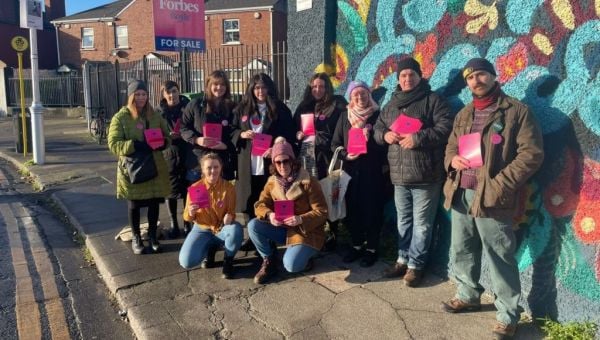 Anti-refugee protests in Dublin’s East Wall have been widespread since the old ESB building in the area was turned into a Direct Provision centre, however, one group of locals has formed a support group for refugees to spread a message of “solidarity and allyship”.

East Wall Here For All is made up of some people whose families have lived in the area for generations, and others who are relatively new to the area.

Paddy O’Dea, a member of the group, told BreakingNews.ie: “It’s all about trying to establish and maintain positive relations for all residents in East Wall including the new members of our community in the Direct Provision centre.

“Really it was borne out of, the protests obviously started in early December, and obviously a lot of people, including myself, were appalled and upset by the protests.

“My immediate reaction was ‘this isn’t the East Wall I know’. I’ve been living in the area for nearly three years now. It was really borne out of a feeling of ‘how do we do something that is constructive, but also doesn’t further entrench the different sides?’

“The group itself is a community group and our message is anchored in solidarity and allyship with the residents in the Direct Provision centre.”

Please take a look at what our group has been up to in the last few weeks.

We stand in solidarity with all people seeking refuge across this country, and we will do what we can to make #eastwall the welcoming community we know it is. pic.twitter.com/IRIZ9lu3l8

“The vast majority of people are really pleased to know there was a different voice emerging and that there was all this positive work happening on the ground in the community.

“We got together quite early on and looked at what we wanted to stand for and what our role in the community. That is how we ended up with a two-pronged approach, one is outreach with the residents in the Direct Provision centre, hearing from them, learning more about their experiences, and asking them what are their short-term practical needs that currently aren’t being met.

“The fundraising was complimentary of that process, we did a winter clothing drive. A lot of those people were moved into the centre on the coldest weekend of the year, it was -6 and -7 degrees. They didn’t necessarily have any access to winter coats, hats, scarves or the appropriate footwear so we had a call to action and the response we got from East Wall and also further afield was amazing.”

Bohemian Football Club and Pantibar both held toy drives in aid of East Wall Here For All, “so every child in the centre had a gift to open on Christmas morning”.

These essentials were the immediate goal of the group, Mr O’Dea explained, and they will soon move on to helping refugees become more involved in the community and acclimatised to the area.

I think it really resonated with people, the idea that someone could be bringing a newborn into the world in such challenging circumstances.

“We’ve also created an onsite donations hub at the centre itself and that’s where we organise and collate all the donations that people have made and then distribute them to the residents.

“There was a baby born over the Christmas period and we did a big call to action to mother and baby groups and it was incredible to see people coming in with Moses baskets, buggies, prams, baby formula, baby wipes, nappies, and there’s another baby due in the next few weeks, and that’s been amazing to see.

“I think it really resonated with people, the idea that someone could be bringing a newborn into the world in such challenging circumstances.”

After sitting down with the residents to hear their concerns, a letter has been drafted up and sent to local elected representatives and Minister for Children, Equality and Integration Roderic O’Gorman.

“Also proper transport provisions for children who came from other Direct Provision centres in west Dublin and were enrolled in creches and schools there. Basic things that weren’t there because they were moved into a former office block at very short notice without the necessary supports.”

Beautiful day to be out chatting to our neighbours in East Wall. Lots of engaging conservations. If you wanna get involved follow us here or on insta! #eastwallhere4all pic.twitter.com/Xm9BebxgZh

Mr O’Dea said East Wall Here For All will now focus on helping people to integrate into the community. Having lived in East Wall for thee years, he said “in my experience it’s a brilliant, welcoming and active community, and the hope is other can have that experience”.

“A goal of ours is to teach them about East Wall and the wider locality, the different amenities on their doorstep, some of them don’t have very good English so that can be a challenge.

“It’s really about helping them to integrate. A lot of them have useful and relevant skills, and they want to bring them to the community, so you need to create the right sort of infrastructure to allow that to happen, that’s all in the mix right now. How we can make them feel more integrated in the community is what comes next.”

You can donate to the East Wall Here For All fundraiser here.