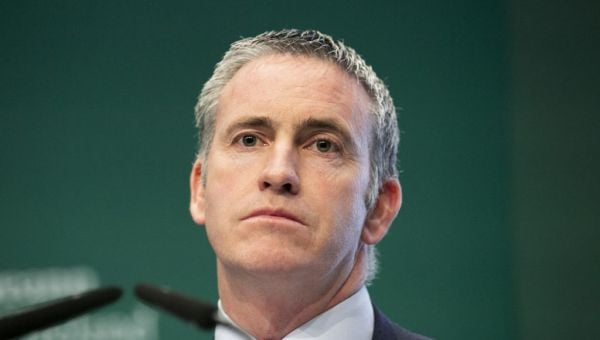 Fine Gael TD Damien English has resigned from his position as Minister of State at the Department of Enterprise, Trade and Employment following questions surrounding a planning application he submitted in 2008.

The Meath West TD said he informed Taoiseach and Fine Gael leader Leo Varadkar of his decision on Wednesday evening.

On Thursday morning, Mr English issued a statement on the matter which read: “Yesterday in an online article, questions were raised about my planning application from 14 years ago.

I have informed the Taoiseach last night of my decision to resign as Minister of State at the Department of Enterprise, Trade and Employment.

Yesterday in an online article, questions were raised about my planning application from 14 years ago. I reviewed this application,

“I reviewed this application, made in 2008, and it is clear to me that I failed to inform Meath County Council about ownership of my house in Castlemartin.

“This was wrong, not up to the standard required and I apologise for doing so.”

Mr English thanked his constituents for their support, adding he will “continue to serve them and work hard on their behalf in the constituency”.

He also thanked Mr Varadkar and his parliamentary colleagues, in addition to his wife and family.

“It was his view given the circumstances that his position was not tenable,” the Taoiseach said.

“I agreed and accepted his resignation,” he added.

What he did was wrong

Later, speaking to RTE Radio’s Morning Ireland, Labour’s education spokesperson Aodhán Ó Ríordáin said Mr English’s resignation demonstrated that people in public life needed to be “an awful lot more serious about their declarations, because what he did was wrong”.

The resignation did not help the stability of the Government, but the resignation had “spared us” weeks of disarray, Mr Ó Ríordáin added.

“We can’t expect members of the public to be truthful in their applications, and filling out the forms if those in the public eye aren’t doing it as well.

“There has to be a much higher standard for those of us in political life. In terms of Government, I would hope that this doesn’t happen again.”

The Labour TD stressed we need to have trust in politics, “we can’t have assumptions within the public that those who are involved in public life just aren’t honest”.

“It’s not good enough to forget that you own a house. You can’t play fast and loose with facts,” he said, adding that the Standards in Public Office (Sipo) system should be more robust to handle such matters.