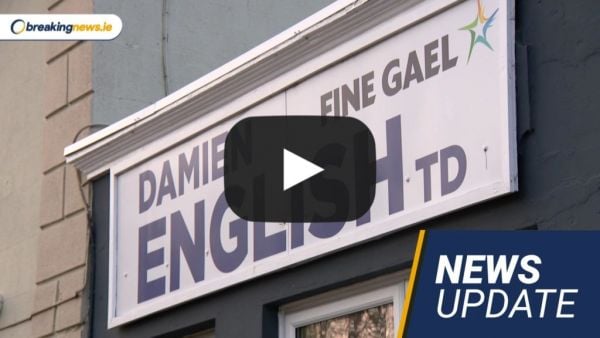 Fine Gael TD Damien English has resigned from his position as Minister of State at the Department of Enterprise, Trade and Employment following questions surrounding a planning application he submitted in 2008.

The Meath West TD said he informed Taoiseach and Fine Gael leader Leo Varadkar of his decision on Wednesday evening.

On Thursday morning, Mr English issued a statement on the matter which read: “Yesterday in an online article, questions were raised about my planning application from 14 years ago.

“I reviewed this application, made in 2008, and it is clear to me that I failed to inform Meath County Council about ownership of my house in Castlemartin.

“This was wrong, not up to the standard required and I apologise for doing so.”

Met Éireann is warning of the possibility of downed trees, power outages and travel disruption as strong winds batter the country.

Donegal has been upgraded to an orange alert for Thursday afternoon, ahead of gale force winds with some “severe and damaging gusts”.

The rest of the country will remain under a yellow wind warning which took effect from 5am on Thursday.

The orange warning for Donegal will commence at 2pm and remain in place until 8pm on Thursday, while the yellow alert is due to last until 2am on Friday.

“Westerly winds will be very strong and gusty today, in the west at first, progressing eastwards in the afternoon,” the forecaster said.

The EU and the British government are not “anywhere close to a deal” on issues surrounding the Northern Ireland Protocol, DUP leader Sir Jeffrey Donaldson has said.

The comments came as Taoiseach Leo Varadkar, Tánaiste Micheál Martin and UK Labour leader Sir Keir Starmer are all set to hold talks in the North on Thursday as part of efforts to resolve the dispute over the post-Brexit trading arrangements.

The Taoiseach and Mr Starmer are to meet with Stormont’s political parties to discuss the deadlock over the protocol, which the DUP has cited as its reason for boycotting the power-sharing Executive since May.

Mr Starmer began his two-day visit to the North by meeting business leaders in Belfast.

The English language edition of the controversial memoir by Britain’s Prince Harry sold more than 1.4 million copies on its first day of publication.

Penguin Random House, who published the headline-grabbing autobiography Spare on Tuesday, have reported their largest ever first-day sales total for any nonfiction book published by the company.

According to the publisher, the English language edition of Spare sold more than 1,430,000 units in all formats and editions in the United States, Canada and the UK on January 10th when it first hit bookshop shelves.