IMPAIRE Et Passe will be the latest horse bursting with potential to represent champion trainer Willie Mullins in the Grade 2 SkyBet Moscow Flyer Novice Hurdle at Punchestown on Sunday. 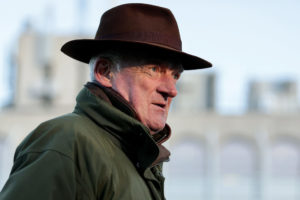 Willie Mullins has another horse of huge potential ready to go at Punchestown on Sunday
Photo: ©INPHO/Laszlo Geczo

Almost on a yearly basis Mullins nominates a novice from his top rank for Sunday’s feature race at the County Kildare venue and has won it previously with Mikael D’Haguenet, Vautour, Douvan, Min and last year with Dysart Dynamo.

Impaire Et Passe’s Irish debut was extremely impressive when he recorded an 18-length success in a maiden hurdle at Naas last month and Patrick Mullins, assistant to his father, Willie, gave a positive update ahead of the weekend.

“He is a big scopey horse who won well at Naas the last day. He had been working well at home going to Naas but certainly nothing like what he showed that day and that surpassed our expectations.”

“Some horses thrive after winning a race and you can see them grow in confidence and Impaire Et Passe has come out of the race really well and I’d like to think he will progress from it. We’d like to think that he will be at the top end of his division,” Mullins added.

Opposition to Impaire Et Passe could come from course and distance winner The Model Kingdom.

The Noel Meade-trained filly was a Grade 3 winner at the Punchestown Festival last season when landing the Weatherbys GSB EBF Mares Bumper and returned to the track in November to score over hurdles.

The Model Kingdom’s fondness of Punchestown may give Meade a strong chance of winning the Moscow Flyer Novice Hurdle for the first time since Orbit O’Gold sprang a shock at odds of 50/1 in 2007.

The potential line-up for the SkyBet Novice Hurdle is completed by the Tom Mullins-duo of C’est Rien and Hey Johnny.

The Grade 3 Madigan Group Novice Chase is another race on the card with an elite roll of honour. Carefully Selected, Envoi Allen and Bob Olinger could well be joined by another potential star with the likes of Mouse Morris’ Gentlemansgame and the Elliott-trained Minella Crooner among the nine going forward.

Grade 2 winner Impervious is a big runner for trainer Colm Murphy with the six-year-old daughter of Shantou now carrying the colours of JP McManus after winning at Cork for Paul McKeon last month.

Willie Mullins is likely to be represented by Ha D’or who opened his account at the first time of asking with an impressive display at Fairyhouse.

“Ha D’or had graded form last year and took to chasing pretty well at Fairyhouse,” Patrick Mullins added. “He has been working well at home but this looks a very hot race.

“Glengouly looks a better chaser than he was a hurdler but he will still need to make a step forward to get to the level of Ha D’or and some of the other potential runners in the race.”