NEW Oak Boys will welcome League of Ireland opponents to Carlow before the end of the month after they were paired with First Division side Bray Wanderers in the fourth round of the Leinster Senior Cup.

The competition is the oldest football tournament in Ireland and was first contested in 1892 and is making a return this season after a three year break due to Covid.

This is the furthest that New Oak have gone in the competition and they have some tremendous wins already over the likes of Kilbarrack Utd and Killester/Donnycarney but League of Ireland opponents will be another step up in level. 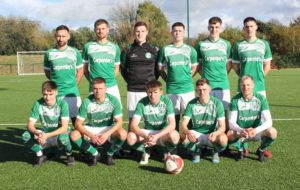 Bray, have finished runners-up in this cup on three occasions, most recently in 2010, and they  finished seventh in the First Division last year and are currently managed by Ian Ryan.

There is potentially a huge prize on offer should New Oak be able to land an upset victory after the draw for the quarter-finals be made last night as well.

If New Oak beat Bray then they will potentially face a home tie in the last eight against the champions of Ireland Shamrock Rovers, if they come through their fourth round tie against UCD.

The fourth round of the cup will be played before 31 January with the quarter-final to be played a week later.