Varadkar hopeful that deal over protocol can unlock Stormont stalemate 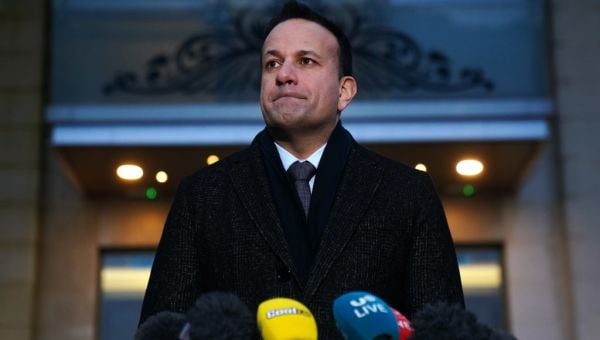 Taoiseach Leo Varadkar has said he is hopeful that an agreement can be reached between the EU and the UK on the Northern Ireland Protocol which will unlock the Stormont stalemate.

After meeting with political parties in Belfast, Mr Varadkar said protocol negotiations were “not in the proverbial tunnel yet” but said he would like to get a deal which was acceptable to unionists.

The Taoiseach, UK Labour Party leader Sir Keir Starmer and Tánaiste Micheál Martin all held meetings in Northern Ireland on Thursday as part of efforts to resolve the dispute over the post-Brexit trading arrangements.

Stormont’s powersharing government collapsed almost a year ago when the DUP withdrew its first minister in protest against the trading barriers created by the protocol.

Mr Varadkar and Mr Starmer had separate meetings with the main Stormont parties to discuss the deadlock.

The talks continued to be overshadowed by the row over the exclusion of Sinn Féin leader Mary Lou McDonald from a meeting with UK foreign secretary James Cleverly earlier in the week.

Speaking on his first visit to Northern Ireland since being reappointed as Taoiseach, Mr Varadkar said: “I think it is fair to say that all five parties are committed to devolution, I am convinced they are sincere about that.

“Unlocking that is a requirement that we come to an agreement on the protocol and those discussions are now under way between the European Commission and the UK Government.

“I am hopeful that it will be possible to come to an agreement on the protocol that will allow it to work more effectively, hopefully become more acceptable broadly across society here and will then allow the institutions to be re-established.”

He added: “I am keen to repair and restore relations, not just with the political parties here but also with the UK Government and between the European Union and the UK.

“I think the reason why relations became strained in the first place was because of Brexit but there is no point revisiting all that.

“Certainly since then lots of us have made mistakes. I have acknowledged that the way the protocol was implemented was too strict and too rigid and that created real difficulties.

“I am totally of the view that we can work together to make changes that are necessary, that can get back to a very low number of checks.

“We would like to get to the point where we can agree something that works for everyone and works on a cross-community basis.”

Mr Varadkar, who is deeply unpopular with some sections of unionism, denied that he had ever used the threat of a return to violence in Northern Ireland during Brexit negotiations.

He said: “What I did was express concerns at the time, concerns that were held by the chief constable, were held by the garda commissioner, that the re-establishment of border posts between north and south could lead to violence.”

DUP leader Sir Jeffrey Donaldson said the Taoiseach now has a “better understanding” of the difficulties the protocol has created for the province.

Mr Donaldson said: “We reiterated our seven tests as being the basis for judging any agreement as to whether it meets the requirements to respect Northern Ireland’s place within the UK internal market and to facilitate ongoing cross-border trade.

“That’s why an agreement that works for everyone has to be a way forward. We respect the fact that he is the Irish Prime Minister (Taoiseach), head of the Irish government, and we will work with whoever is in that office under the current government.

“We recognise that cooperation is important, but we can’t restore the political institutions until we get an outcome on the protocol that unionists can support.”

Sinn Féin president Ms McDonald said her party had a “very constructive” meeting with the Taoiseach.

She told the media: “We have reflected our absolute determination that government must be restored here in the north… it’s unacceptable that we stagger on without an executive.

“We have also shared our strong view that a deal on the protocol is possible… and we believe that the window we now have has to be grasped with both hands.”

Hopes of a deal over the contentious protocol were raised this week when the EU and UK reached agreement on sharing customs data.

Mr Heaton-Harris said: “There has been a tiny bit of progress made in talks with the European Union.

“There is still a way to go, but we are talking in good faith, and as I stand here now there are talks going on, so let’s see where they get to.

“We have another assessment next Monday where I will be with the Foreign Secretary and Maros Sefcovic (Vice-president of the European Commission) going through the progress that has been made this week.”