Youth (18) jailed for serious attack on man on Luas 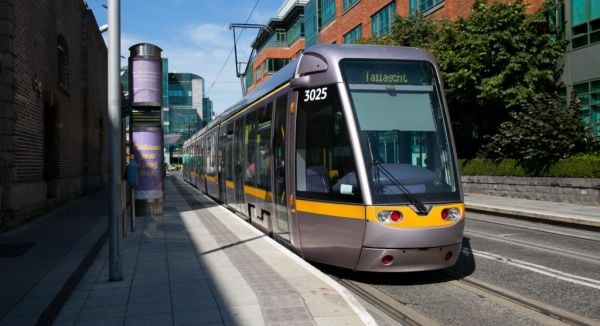 An 18-year-old youth has been sentenced to three years in prison for an attack during which a man was kicked and beaten until he lost consciousness.

Jamie Walsh and another teenager set on the victim shortly after they had seen the victim kissing his partner and had told him “it’s so gay”.

Lawyers for Walsh told the court that while the attack appeared as homophobic, it was more of a case of drunkenness and immaturity.

Passing sentence on Thursday at Dublin Circuit Criminal Court, Judge Martin Nolan said it had been a serious assault on an unfortunate man who took a while to recover. He suspended the final 16 months of the sentence, noting that Walsh was aged 17 at the time of the offence and had many challenges in his early life.

A victim impact report written by the injured man was handed into court but was not read aloud. The court heard that the co-accused, who was aged 14 at the time, has already been dealt with by the courts.

A prosecuting garda told Lisa Dempsey BL, prosecuting, that the injured man and his partner had been at the Jervis Street Luas stop shortly after midnight when they first came into contact with both accused teenagers.

The two men were hugging, laughing and kissing, and the injured party tapped his Luas card on the machine to pay for a ticket.

The court heard that a boy came up and asked the injured party why he was kissing his partner on the neck and said, “it’s so gay”.

The injured party’s partner replied, “what’s wrong with that?” and saw the two boys laughing at them.

The Luas then arrived, and the injured party got on the tram, while his partner left the platform to go home. The two boys got on the Luas in front of the injured party, who got off the tram at a later stop and began to walk home towards the Naas Road junction.

One of the boys asked the victim for a cigarette. While the injured party was reaching into his bag to get a cigarette, he saw the second accused running at him, pulling him to the ground.

Both accused then started punching and kicking the injured party, who later told gardaí that he didn’t remember much after that until he woke up on the ground and checked his belongings.

His bag was on the ground, and he was disorientated, but he texted his friend and housemate who came and brought him home and got ice to apply to his head.

The injured man also texted his partner and sent him photographs of his injuries. His partner then came to the house and accompanied him to St James’ Hospital.

The victim had been knocked unconscious and was confused; his lip was swollen and bleeding and his eye and forehead were bruised and scraped. His body was in a lot of pain, and he was treated at hospital and had to take four days off work, the court heard.

CCTV footage from the Luas was used to identify Walsh and his co-accused, and Walsh was arrested at his grandfather’s house almost a month later. He had been missing from his care home since a few days before the assault.

Walsh has 48 previous convictions, of which 29 are for theft, six for robbery and others include assault causing harm and criminal damage.

Marc Thompson Grolimund BL, defending, said most of his client’s previous convictions relate to the theft of vodka, and that he had been drunk on the night of the assault.

He said, although the offence appears as homophobic, he would put it more down to both accused being drunk and immature. The court heard that Walsh has been in the care of the State since the age of seven or eight as both his parents have spent significant periods of time in custody.

Walsh and his brother Lee, who was present in court, were taught and actively encouraged to commit offences by their parents, the court heard, but counsel said Lee is in full-time employment and has no previous convictions.

Mr Thompson Grolimund said Walsh has a chance of rehabilitation going forward and has expressed remorse for his offence.

Judge Nolan ordered Walsh to be of good behaviour for the duration of his sentence and to abide by the supervision of the Probation Services for one year on release.