Bailey and Buendia fire Villa to victory over Leeds 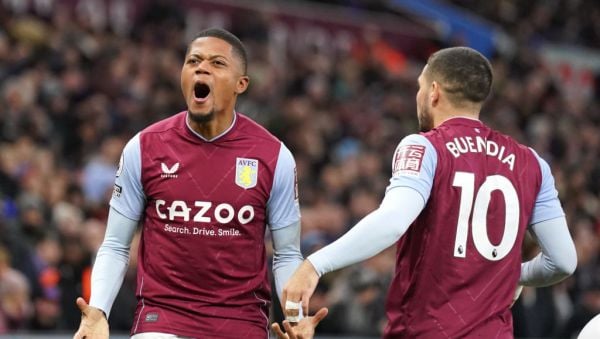 Friday the 13th proved an unlucky one for Leeds United.

Jesse Marsch’s side dominated for long spells only for Villa to score a second goal against the run of play, thanks to VAR.

By contrast, Leeds were denied by the video assistant as their indifferent run of results continued.

But remarkably they led at half-time after containing a bombardment from Leeds following a third-minute goal from Leon Bailey.

Leeds went into the contest with two wins in their previous 14 Premier League games, and the way they tore at Villa for much of this game showed a steely determination to improve that sequence.

Ashley Young started the move for their goal from a Leeds corner with a flighted pass to Boubacar Kamara.

The midfielder ran at the Leeds defence, cutting inside Pascal Struijk before squaring to Bailey, who took a touch onto his favoured left foot prior to bending a shot into the far corner of the net.

What looked like a dislocated shoulder for Villa left back Digne prompted an early debut for Alexandre Moreno after just nine minutes.

And the 29-year-old new £13.2m signing from Real Betis was to save a certain goal before half-time.

Leeds missed numerous chances to equalise as they dominated proceedings, with Villa – dabbling in a dangerous game of playing it out deep from the back – could only hit them on the counter.

Rodrigo suddenly found time and space deep inside Villa’s box after a cross from the right, but just as he was to pull the trigger, Ezri Konsa stuck in a vital boot to stab behind.

Villa were forced into a second change after another injury with little over half an hour gone.

This time Watkins was the unlucky one, replaced by Danny Ings.

Villa had Moreno to thank for keeping their lead intact two minutes before the break.

Rodrigo had an open goal after rounding Martinez from Jack Harrison’s defence-splitting pass, but the Spaniard sprinted back and diverted the shot behind with his trailing leg.

Leeds finally had the ball in the net in time added on at the end of the first half.

But Rodrigo was denied the equaliser by the offside flag stabbing home a rebound after straying inches beyond last man Tyrone Mings from Wilfried Gnonto’s cross.

After Moreno forced Illan Meslier into a diving save with a low shot, Leeds’ onslaught continued into the second half with an angled effort from Gnonto that forced a flying stop from Martinez.

Rodrigo then fired low into the sidenetting when he should have tested Martinez before Villa doubled their lead in the 67th minute.

It took VAR to confirm it after initially being ruled offside, but there was no denying Emiliano Buendia’s header after Meslier could only palm Bailey’s fierce shot upwards.

Moreno sent an angled effort into the sidenetting before clean-through Ings was denied by Meslier.

Leeds made it a grandstand finish after substitute Patrick Bamford slotted home when Gnonto beat Young and Morgan Sanson before crossing in the 82nd minute. But Villa held on.