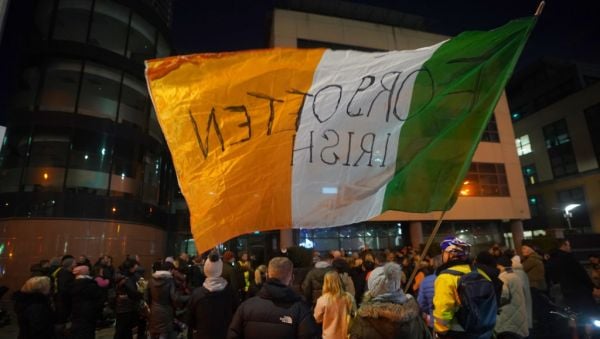 Independent Dublin councillor Vincent Jackson has told of the fear and upset experienced by his family when protesters gathered outside his home in Ballyfermot on Thursday night.

Cllr Jackson told RTÉ radio’s Today with Claire Byrne show that he had been at the optician with his son when the protestors gathered and shouted obscenities at his wife and daughter.

Protestors had moved from the roundabout in Ballyfermot to his home, stayed for 25 minutes, moved to the convent and secondary school and then back to his house again.

The protestors claimed that Cllr Jackson was “a traitor” who had let them down and shouted ‘get them out’ about the refugees they believed were being accommodated in local schools.

“My family were in the home on their own, they were in a very distressed situation. It is very alarming that this type of behaviour has the potential to take root in our communities.”

Cllr Jackson said he loved living in the area, which he has represented as an independent councillor for 32 years. His daughter could not sleep, his was son upset and worried, and his wife did not sleep at al last night.

“There’s no truth in rumours that people staying in the schools, leaving at 7 o’clock in the morning. We have hot meals in the schools which are delivered at 3am by Glanmore Foods, we had to cancel those meals last night, and there was a huge drop-off in attendance today, parents are not happy to send children past distressing scenes.

“We were told there were people outside the school watching what’s going on. There was no telling people, we tried to explain to people yesterday that school meals are delivered.”

Cllr Jackson said he hoped the good work in schools would not be undone “by this misguided few”.

“Unfortunately they’re being fed information that’s totally incorrect and God himself, or herself, couldn’t put these people on the straight and narrow.

“There’s a narrative out there, whipping them up. They don’t believe anything they’re being told [by authorities].”

Cllr Jackson said that it was unfortunate that a group of “elderly nuns” at the Daughters of Charity had been subjected to “terrible abuse” and were repeatedly told ‘we know they’re in there.’ He added that he had seen teachers crying in the corridor in schools upset at protests at the school gates yesterday.

“I hope those people are proud of themselves. I have worked for the people of Ballyfermot for 32 years. I work night and day for young and old people. Just to think that people would believe a narrative that is incorrect worries me. I fear for the future that these groups get some sort of log end, create mayhem and confusion and use people for cannon fodder.”