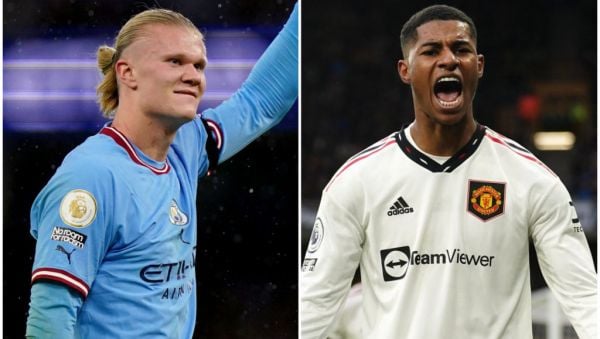 Marcus Rashford and Erling Haaland will be in the Manchester derby spotlight on Saturday as the pair go head to head at Old Trafford.

Here, the PA news agency looks at how the two strikers are shaping up as United host City in an eagerly-awaited Premier League clash.

Rashford’s current form mirrors that of a United side rejuvenated under Erik ten Hag.

United have chalked up eight successive wins and Rashford has built on his World Cup form for England, scoring in every game since his return from Qatar, with seven goals in six appearances.

Haaland hit the ground running after his World Cup break as Norway were not in the tournament, notching four goals in his first three games back.

But Haaland has not scored in two games – the first time he has failed to do so during his time at City.

Add Rashford’s three goals for England at the World Cup – when he scored every 45.66 minutes – and he has hit the net 18 times this season.

Seven of those from United’s top scorer have come in the Premier League.

Haaland tops the Premier League goal charts with 21 in 16 league appearances, with a scoring record of 62 minutes per goal.

The 22-year-old has scored 27 goals in 22 appearances overall since his summer arrival from Borussia Dortmund.

Manchester-born Rashford scored the winner on his derby debut when United won 1-0 at the Etihad Stadium in March 2016.

The 25-year-old has played against City 16 times in his career and scored four goals.

Rashford has gone six Manchester derbies without scoring, his last goal coming in a League Cup defeat at Old Trafford three years ago.

Haaland scored a hat-trick on his one and only derby appearance, as City beat United 6-3 at home in October.