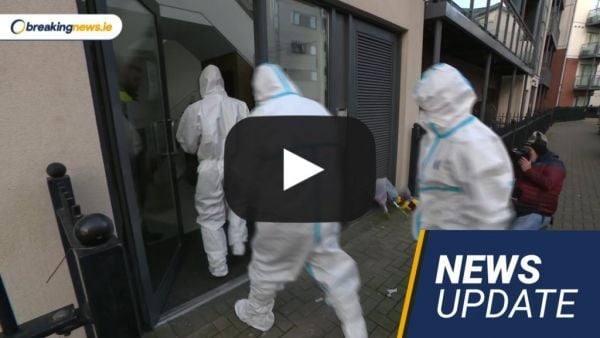 An Garda Síochána have launched investigations after the body of a woman was discovered in north Dublin on Friday morning.

Gardaí were alerted to an incident at approximately 10am in Royal Canal Park, Ashtown, in Dublin 15.

The woman, in her 40s, was found unresponsive in an apartment at the address.

The scene is currently preserved to allow for a forensic and technical examination by the Garda Technical Bureau. The body of the deceased remains at the scene.

The Office of the State Pathologist has been notified and a post-mortem examination will be conducted at the Dublin City Mortuary.

Mum-of-three Christina Anderson has pleaded guilty to manslaughter by reason of diminished responsibility for stabbing a man to death outside her home after spending over a month on trial accused of murder.

Ms Anderson, who has been a patient at the Central Mental Hospital (CMH) since shortly after she stabbed 39-year-old Gareth Kelly to death, had previously pleaded not guilty to murder by reason of insanity at the Central Criminal Court. This morning lawyers in the case revealed that the Director of Public Prosecutions (DPP) has spent this week considering a plea to the lesser charge of manslaughter.

Ms Anderson was arraigned on the new charge of manslaughter and pleaded guilty in front of the jury that had been sworn to hear her trial. Patrick McGrath SC, for the DPP, said the plea was accepted and the DPP intends to enter a “nolle prosequi” in relation to the murder charge at a sentencing hearing next April.

A second man who was accused of murdering teenager Keane Mulready-Woods has pleaded guilty at the Special Criminal Court on Friday morning to the lesser charge of facilitating the 17-year-old’s murder.

Gerard Cruise, with an address at Lower Sherrard Street in Dublin 1, was originally charged with the teen’s murder at a house in Rathmullan Park on January 12th or 13th, 2020.

The 49-year-old, who was previously given a date later this month for his murder trial at the three-judge court, was arraigned today on the new charge.

Cruise pleaded guilty on Friday to a charge that, with knowledge of the existence of a criminal organisation, he participated in activities with intent to facilitate a serious offence, namely the murder of Mr Mulready-Woods, at Rathmullen Park, Drogheda, Co Louth, between the dates of January 11th and 13th, 2020, contrary to Section 72 of the Criminal Justice Act 2006.

Mr Richmond has been a TD since 2020 and has contributed regularly on issues around the European Union, Brexit and the Northern Ireland protocol.

Speaking following the Cabinet decision, Taoiseach Leo Varadkar said: “I was very happy to nominate Neale Richmond for this important position. Neale is an exceptionally capable politician and parliamentarian who has been to the forefront of issues arising from Brexit, including its impact on Irish business and trade. He is a first time TD but has also served a full term in the Seanad.

“I have asked Neale to work closely with Ministers Simon Coveney and Heather Humphreys on maintaining Ireland’s strong employment base in the face of challenging global conditions, and to aim for ongoing growth in all of Ireland’s main employment sectors. I have also asked him to continue his focus on ensuring that the work permits system is operating effectively and allowing essential staff to come to Ireland. He will also be responsible for seeing through the reforms I initiated as Minister including sick pay and the move to a National Living Wage.”

The National Lottery has appealed to Lotto players in the village of Castlegregory on the Dingle Peninsula in Co Kerry to check their tickets following Wednesday’s (January 11th) Lotto Plus 1 win of €1 million.

Celebrations are already underway at Lynch’s Country Store on Strand Street in the centre of Castlegregory village which sold the winning Quick Pick ticket for the Lotto Plus 1 top prize win.

“Our customers have had a recent run of good fortune with Lottery prizes in the store, but this million euro win puts the icing on the cake. Just before Christmas, our own staff syndicate won a €50,000 EuroMillions prize, so we know what the winning feeling is like.”