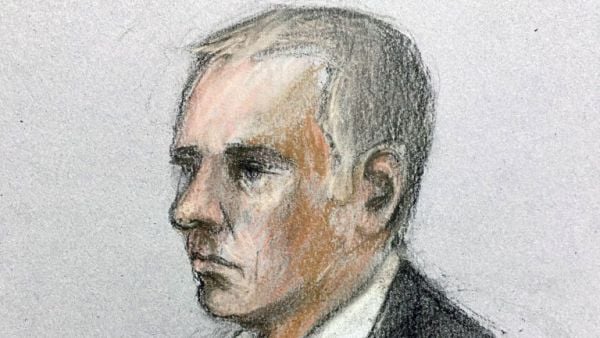 Ex-Sinn Féin councillor Jonathan Dowdall, a former co-accused of Gerard ‘The Monk’ Hutch who has turned State’s witness, asked a garda “is there any way out” and “if him and his family could get into the Witness Protection Programme” in the days following his arrest, the Regency Hotel murder trial has heard.

The Special Criminal Court has already heard that the status of Dowdall’s Witness Protection Programme (WPP) application remains unknown and that a decision will not be made until the middle of this month.

Before Dowdall took the stand on December 12, a Detective Superintendent from the WPP, testified that the key witness’s assessment for the WPP was “ongoing” and was “completely independent” from the evidence he gave to the court.

Gerard Hutch (59), last of The Paddocks, Clontarf, Dublin 3, denies the murder of Kinahan Cartel member David Byrne (33) during a boxing weigh-in at the Regency Hotel on February 5th, 2016.

Giving evidence on Friday, retired member of An Garda Siochana Michael Mulligan told Fiona Murphy SC, prosecuting, that he was involved in the investigation into the murder of Mr Byrne when he attended Terminal 2 at Dublin Airport on May 17th 2016 and observed Jonathan Dowdall in the company of his family.

Mr Mulligan said he observed Dowdall “clear security” in Terminal 2 before he approached him, identified himself and arrested him for murder with a firearm at the Regency Hotel. Dowdall was detained at Clontarf Garda Station.

When Dowdall was under cross-examination for seven days by Mr Hutch’s defence counsel Brendan Grehan SC before the Christmas break, the ex-politician said he had gone through security in the airport in May 2016 and was about to board a plane to go to see his sister in Dubai when he was arrested for the murder of Mr Byrne.

Dowdall later told counsel in his cross-examination that he was booked to go away to Dubai saying: “I wasn’t coming home, I had set up work in Dubai and I was staying in Dubai”.

Mr Mulligan said on Friday that he searched Dowdall in the airport and took possession of his mobile phone. The father-of-four supplied Mr Mulligan with a pin number for his phone and informed the officer that there was correspondence on the handset from his solicitor. Mr Mulligan told Dowdall that he would not examine the phone until he received further directions from his superiors.

On the evening of May 19yj, 2016, Dowdall was taken to the Criminal Courts of Justice Building to have his detention further extended.

When Dowdall was returned to Clontarf Garda Station, Mr Mulligan said that two of the prisoner’s daughters came to visit him. “While in that room, he said ‘is there any way out’,” said the witness. Mr Mulligan said he told Dowdall that he was not having “this conversation” with him.

Mr Mulligan said he had a further conversation with Dowdall on the evening of May 20 2016, when he was visited by his wife Patricia and one of her brothers. “As I was exiting the room, he [Dowdall] got up and asked could he talk to me in private. He asked if him and his family could get into the WPP”.

Mr Mulligan said he told Dowdall “that was above me and for his solicitor and the DPP”. The witness said he informed his superiors and that this encounter happened after Dowdall emerged from the doctor’s room in the garda station where the visit was taking place.

Under cross-examination by Brendan Grehan SC, defending Mr Hutch, Mr Mulligan agreed he was the arresting officer for Dowdall and that he had waited to arrest him after he had gone through security at Dublin Airport. “He was there with his wife and three children. I allowed him to process himself through security, I wasn’t going to do it in front of his family. I approached him as he was removing items from the tray,” he said.

Mr Mulligan said it was only Dowdall leaving the country at that stage and that he had arrested him for the murder of Mr Byrne.

The witness said Dowdall had replied ‘I think it’s a joke’ when he was told by the detaining member of An Garda Siochana that he could be kept for questioning for up to seven days.

Mr Mulligan said members of the Garda National Bureau of Criminal Investigation had interviewed Dowdall and that he was not involved in the process.

Asked by Mr Grehan why he was the arresting member, Mr Mulligan said it was for no particular reason and that he had a conversation with the late Detective Superintendent Colm Fox [who led the investigation into the attack at the Regency Hotel], who informed him that Dowdall was to be arrested.

Mr Mulligan agreed that Dowdall could have been under no misapprehension at the time that he was being arrested for the murder of Mr Byrne at the Regency Hotel and was going to be detained for up to seven days.

He said he was later involved in bringing Dowdall to court where his detention was extended as the former councillor could only be detained for 48 hours from the time of his arrest.

Mr Grehan put it to the witness that when Dowdall had given evidence before Christmas he had said he only became aware he was to be questioned about the “Alexander Hurley matter” when he was brought before the District Court. “I didn’t make the court aware of it and I can’t recall it being said before the court,” replied Mr Mulligan.

Mr Mulligan agreed with the lawyer that by this stage interviewing gardaí “had moved on to the audio of Dowdall’s trip up north” when his SVU was bugged.

The conversations between Mr Hutch and Dowdall took place when they were allegedly travelling north to a meeting in Strabane in Co Tyrone on March 7th, 2016 in Dowdall’s Toyota Land Cruiser SUV, that had been bugged by garda detectives.The prosecution’s case is that Mr Hutch had asked Dowdall to arrange a meeting with his provisional republican contacts to mediate or resolve the Hutch-Kinahan feud due to the threats against the accused’s family and friends.

The court has heard that a USB key showing Dowdall and his father Patrick Dowdall torturing Alexander Hurley was found inside a kitchen press at Dowdall’s house on the Navan Road in Cabra, when the address was searched on March 9th 2016 as gardai believed that firearms and explosives were being stored there on behalf of the IRA.

Dowdall was later re-sentenced to 7 years and 11 months and Patrick Dowdall to four years imprisonment after successful appeals.

The trial will continue on Monday before Ms Justice Burns sitting with Judge Sarah Berkeley and Judge Grainne Malone.